Most Starfish excel at cleaning algae, detritus, and other waste that settles at the bottom of the tank. However some are predators and enjoy hunting sedentary and slow moving prey.

A Starfish’s exact diet is based on the species, habitat and their natural adaptations.

With so many different dietary requirements it can be difficult to figure out exactly what to feed a Starfish.

Identifying what kind of Star you have is the most important first step.

While there are plenty of similarities between the different species’ diets, no two species will eat the exact same thing. 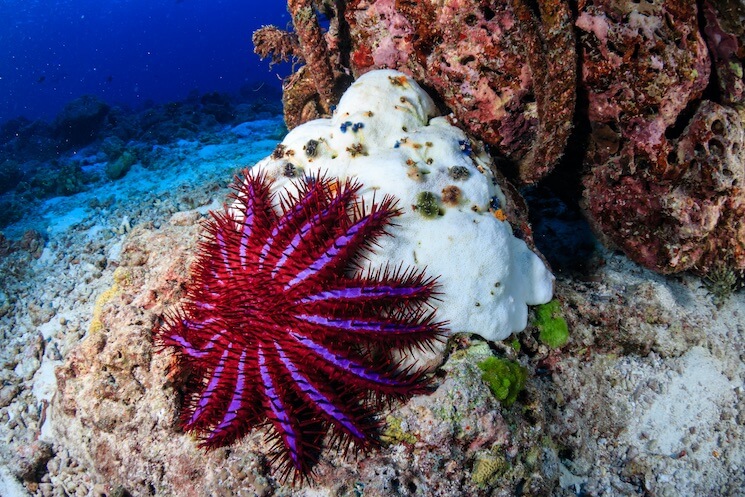 All About Starfish and Their Diets 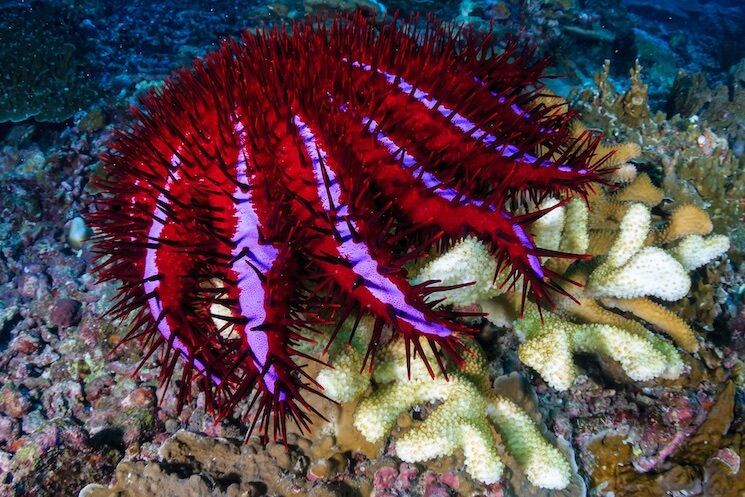 Asteroidea contains all of the most well known Starfish, whereas Ophiuroidea includes the Brittle and Basket Stars.

They are purely saltwater animals and can be found in all the major ocean basins from the tropics to the polar regions.

Starfish have extremely diverse appearances with some reaching only an inch and others growing over 3 feet.

You will find most in shallow areas near the beach and they can often be seen clinging to the rocks in tide pools. Wherever they are found Starfish are always on the seabed (no matter the depth). They do not swim, float, or climb and cannot maneuver in open water.

These voracious predators are always on the hunt. They feed on clams, worms, crustaceans and other small prey that can be found in the substrate.

However, some species’ diets are made up of algae and detritus, whereas others will only eat coral polyps (more on this later).

How Do Starfish Eat?

The best word to describe a starfish’s eating habits is alien.

In order to fully understand how starfish eat we must first take a look at their anatomy.

A sea star’s major organs include the central disk, radial and ring canals, ampullae, stomach and tube feet. These all play a role in how the animal moves and eats.

Tube feet are used for locomotion, eating and probing the substrate for prey. Tiny eyespots near the tube feet function as the primary sensory organs.

They eat and digest their food through the process of eversion, during which the stomach is pushed out through their mouth in order to digest the prey from the outside.

When food is found the Starfish will probe the animal with their tube feet. If it is a clam they will first use their arms to pry the shell open. Once the starfish can easily reach their meal they will use their tube feet to pull it in close to their mouth.

Their transparent stomach is then pushed out of their body through their mouth.

Once the prey is wrapped up in their stomach, the digestive acid begin to dissolve it. Exoskeletons, snail operculums and other inedible parts are corroded to get to the meat inside.

It can take a few hours for the prey to completely digest and after this the Starfish retracts their stomach back inside their body.

Watching a sea star eat can be exciting if you can see underneath the tank. However when seen from above it unfortunately does not look like much. If your Star is hunched over something at the bottom of the tank then it is likely they just caught something to eat.

What Do Starfish Eat In The Ocean? 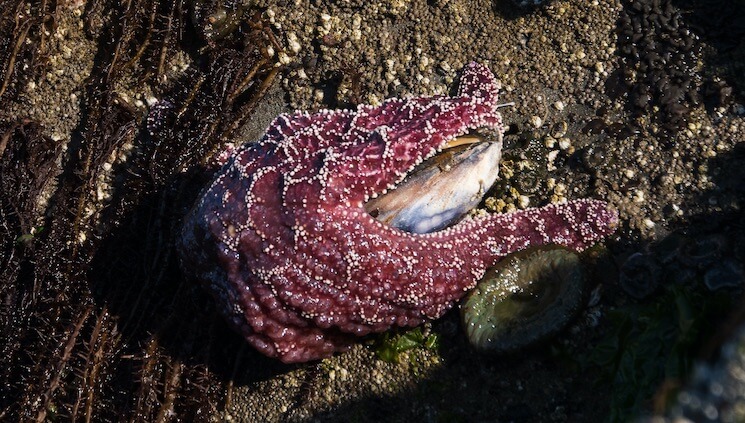 Starfish can be found in all four of the major oceans, so their diets are highly variable.

Their diet depends on their geographic location and the availability of prey in the area.

Starfish can be primary or secondary consumers.

This means that they may feed on algae, phytoplankton, or the small critters that eat them.

Starfish are most likely to go after prey that cannot defend itself.

Clams, mussels, oysters and other shellfish are the favorite food of most species. In fact, they are equipped with several adaptations for opening shells. The starfish’s long arms and tube feet are specifically designed for prying clamshells open and sliding the shells off of hermit crabs.

Larger Starfish can also feed on shrimp, crabs, sea urchins and other crustaceans. Their exoskeletons are easily dissolved by the Starfish’s stomach acid.

Those that are too small to eat moving crustaceans use their tube feet to reach the meat inside. Any snail that is small enough to fit into a Star’s stomach will be eaten.

Smaller predatory Starfish will hunt for bristle worms and other benthic worms. They will also feed on the tiny, bug-like crustaceans that are found in algae beds.

Some species prefer coral polyps to anything else. The Crown of Thorns is the most famous example of this, but the Chocolate Chip and Cushion Star are two others.

Small non-predatory species will often seek out algae and tend to favor phytoplankton (a type of microscopic algae that can settle on the substrate).

When an animal dies and sinks to the bottom of the ocean Starfish are among the first critters to show up and clear away the carrion.

They also clear away dead seaweed and waste produce from living animals.

With the exception of a few species, most Starfish are not specialist feeders. Many of them will eat all of these types of food.

What Do Starfish Eat In An Aquarium? 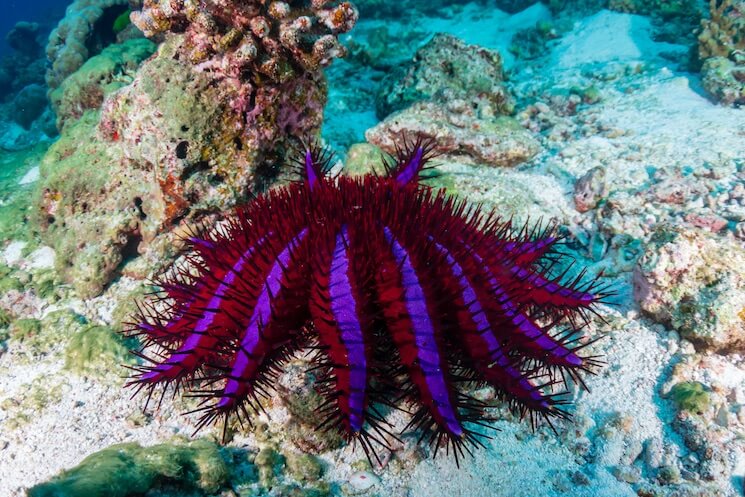 Finding the right diet for your Starfish will depend on which species you have.

Some (i.e. Red Fromia) have highly specialized diets that are difficult to replicate in a tank.

However most species will thrive on a generalized diet that includes a little bit of everything that they would find in the wild.

Clams, mussels, scallops and oysters are the preferred prey of many medium to large sized starfish. Linckias and Chocolate Chips will especially appreciate them.

Bristle worms, tube worms and other kinds of worms all make great options.

They also love to eat snails too.

While they are not a particularly common find, some dealers will keep small sea urchins for Starfish to eat. Urchins can also serve as a good accent to a reef biotope before they are eaten.

There is also plenty of food that occurs naturally in an aquarium.

Starfish are safe and efficient algae eaters and there is always some concentration of algae in a saltwater tank.

They can also help to prevent waste products from fish accumulating too.

Starfish are usually active at night so this is when you should feed them.

They will only need to be fed once every 2 to 4 days.

For predators you can place some small live prey in front of or beside your Starfish and wait for them to move.

Just remember to remove the food from the tank if your Star is not ready to eat yet and never leave uneaten food lying around in your tank. 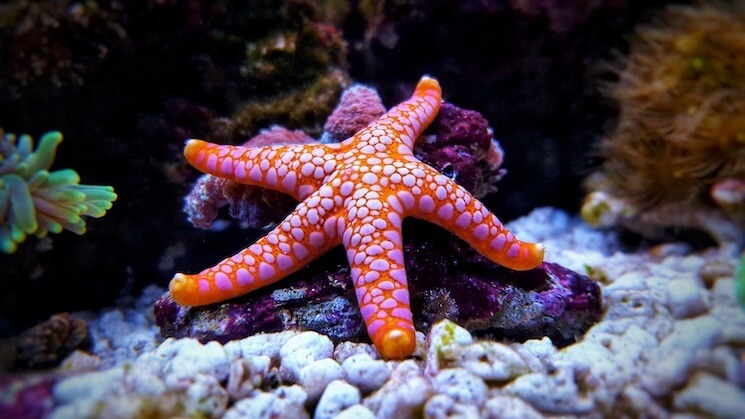 Starfish mare an excellent addition to marine aquariums. If you are looking for more stocking ideas then make sure to read Top 21 Most Popular Saltwater Aquarium Fish.

They can really make a reef stand out and look more authentic.

While every Starfish is similar in some way, each one has their unique care requirements, environment and diet.

Some are perfectly peaceful, while others will hunt down almost everything. However, they will never not hunt anything that does not live on the seabed. Anything in the substrate that is small enough to fit into their mouth is fair game.

Pesky invertebrates, algae, and detritus are all among their favorite snacks. It is no wonder that so many aquarists employ them as a cleanup crew!

David Thomas
David Thomas leads the team at Everything Fishkeeping as the Editor-in-Chief. David has been keeping fish since he was a child. In his first tank he kept goldfish and since then he has kept over 30 different species. Now he has 4 separate tanks and his favorite is a 100 gallon freshwater tank with a school of Rasboras, Tetras and Loaches.
Website

Algae is a familiar sight to every aquarium keeper. Red, green, and brown algae grows naturally in all aquariums. It is part of the ecosystem and is usually not a cause for concern. However, it can become a big problem Read More →

Beautiful aquariums are not always the biggest. Some of the most versatile and beginner friendly tanks are actually small. The 30 gallon fish tank in particular is perfect for beginners. These tanks have less limitations compared to smaller nano tanks. Read More →

Tetras are among the most popular freshwater fish and the Ember Tetra is one of the most beautiful of them all. This eye-catching nano fish is also known as the Fire Tetra because of its lovely orange scales. These playful Read More →