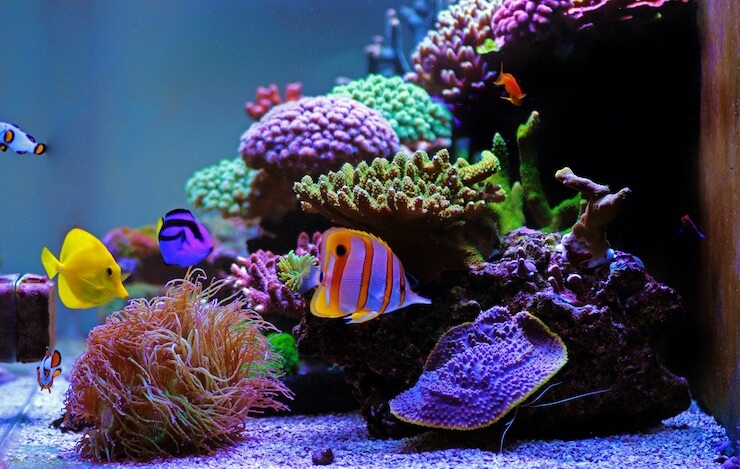 Did you know that there are over 20,000 species of fish in the sea. Over 2000 of these species have made it to the aquarium hobby. Not only are saltwater fish usually more active they are also some of the most beautiful fish in the world.

Whether you are into reef building or simply want to keep a few of your favorite fish species, there is something for you in the marine fishkeeping community. Keep reading to learn 21 of the best beginner fish for saltwater tanks… 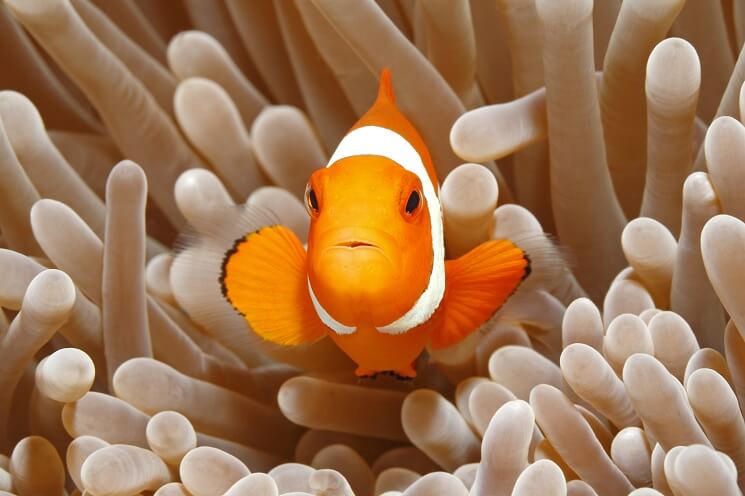 The Clownfish is one of the most famous saltwater fish out there. They are best known for their symbiotic relationship with sea anemones. Clownfish can safely shelter within a sea anemone’s stinging tentacles. The anemone will not sting the Clownfish but will sting anything that tries to come after it.

In an aquarium, these fish are best kept in groups of 4 with at least one anemone per fish. This species is beginner friendly and can live with other colorful reef fish – the Green Chromis is considered their best tank mate. 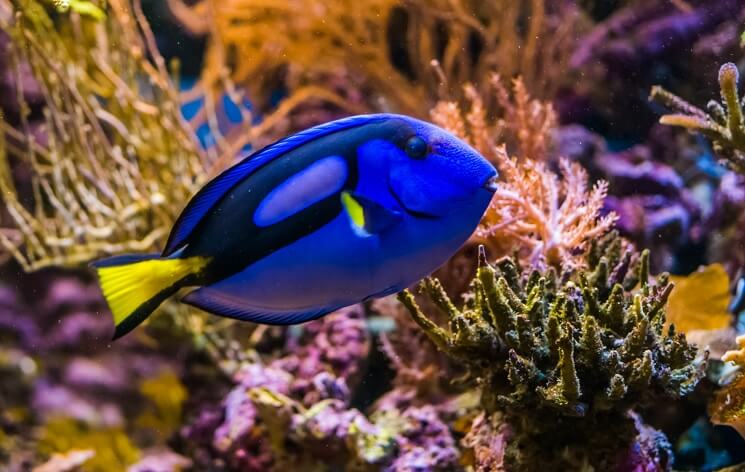 You may have seen this famous fish in the popular movie Finding Nemo. The Blue Tang is a member of the Surgeonfish family and is named for their sharp spines on the sides of their caudal fins. This particular Tang stands out because of their deep blue and bright yellow colors.

However this fish actually goes through a few color changes throughout their life. As a juvenile they start out completely yellow before changing to a grey and blue banded pattern later on. Once they reach maturity they will have their iconic black, blue, and yellow color. A good rule to follow is one Tang per aquarium. In a community tank they can be kept with Clownfish, Green Chromis and certain species of Damselfish. 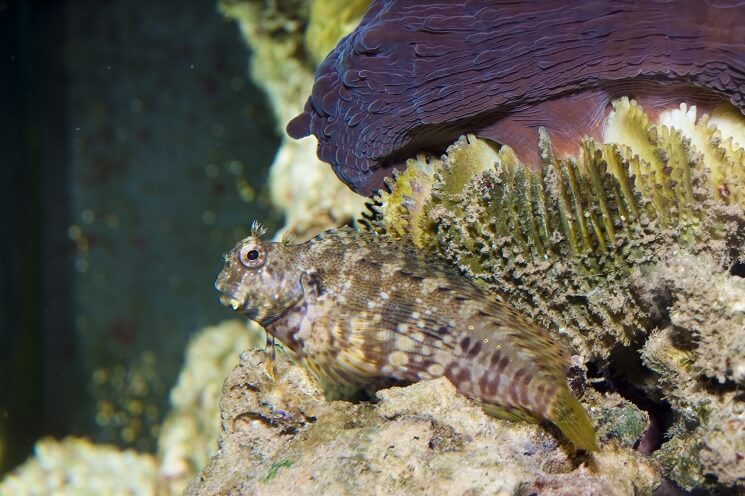 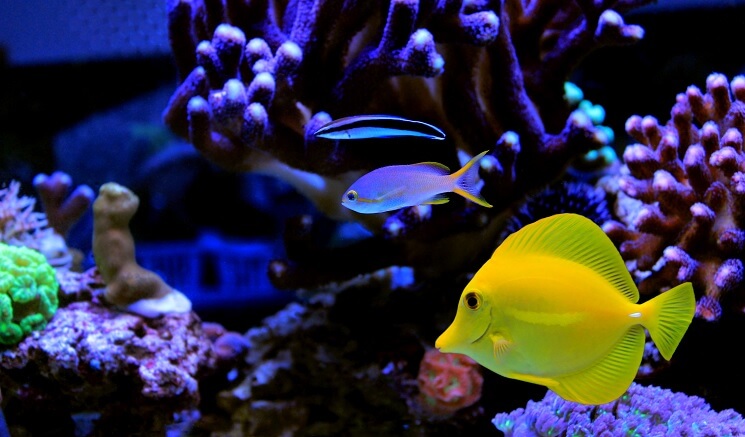 The Yellow Tang is another popular Tang, alongside the Blue Tang. However the two species look very different from one another. A Yellow Tang looks like the Butterflyfish with a box shaped body and fanned fins. During the day this fish is a bright neon yellow hue. At night it dims to a pale shade in order to blend in with the low light.

As with most Surgeonfish, you should follow the one Tang per tank rule. However, this particular Tang can live in small groups if they are all introduced to the tank at the same time. 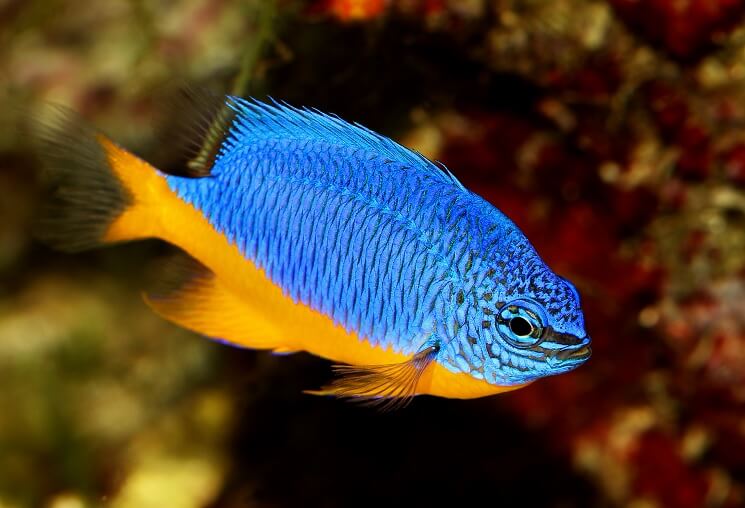 Damselfish can refer to any of the 300+ species in the Pomacentridae family. The Blue Damselfish and Green Chromis are two of the most well-known. Other popular Damselfish include the Azure, Garibaldi and many more.

This popular marine family is well known for their territorial and aggressive nature. They will fiercely defend their established territories from other fish. However there are some species that are more peaceful than others (for example the Green Chromis). Damselfish are prized for their brilliant colors and you can always find one that will fit in with your aquarium style. 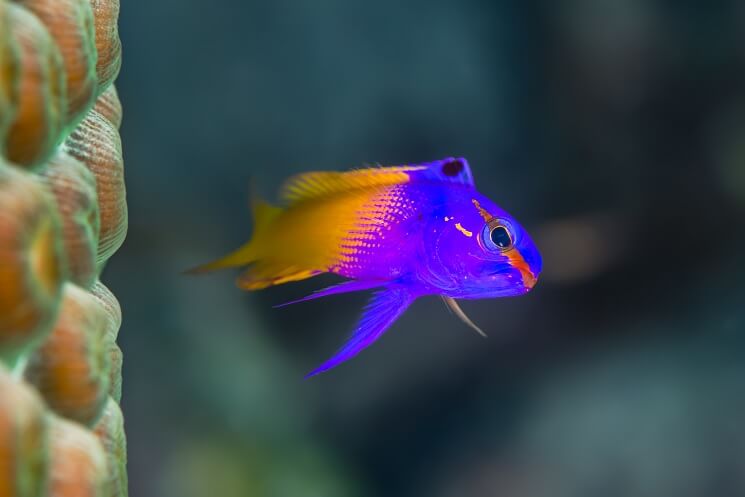 Royal Grammas are perhaps the most well known saltwater fish. Their bright pink and yellow colors make them one of the brightest fish in your tank. A Royal Gramma can be identified by the bright pink and purple hues on their dorsal side, followed by neon yellow at the caudal fin.

They are beginner friendly and make good tank mates for Clownfish and Green Chromis. These are low light aquarium fish that remain near the bottom of the tank. 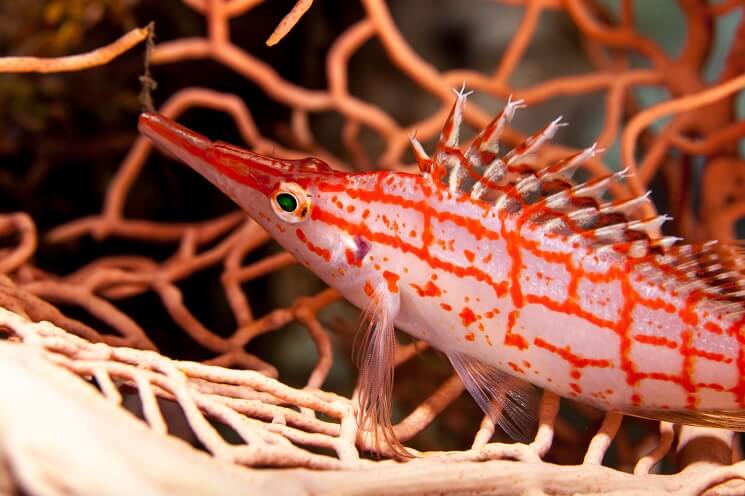 In total there are 33 different species of Hawkfish. Longnose and Spotted Hawkfish are the most popular in saltwater aquariums. Hawkfish can really liven up the bottom levels of your tank. They snack on any small prey that they can find in the substrate. These ambush predators hide out in corals and pounce upon unsuspecting prey. If you have a pest problem in your tank then a Hawkfish or two will be a big help. They will eat bristle worms, small snails, and other unwanted critters. 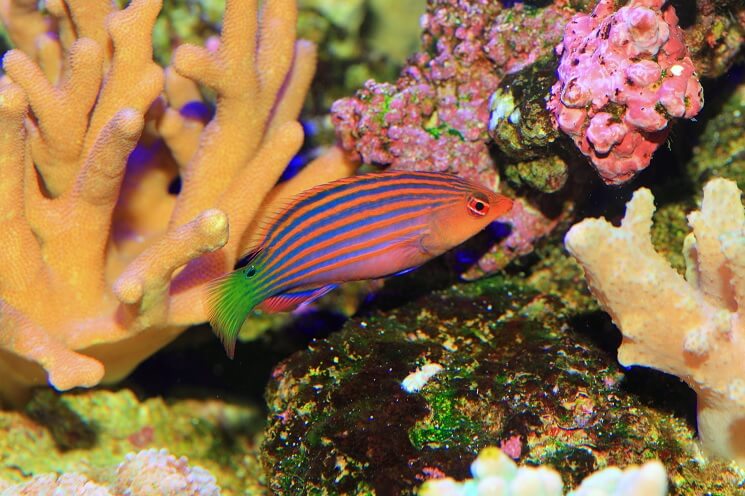 The Six Line Wrasse is a lovely blue and orange striped Wrasse with a bottle shaped body. Acclimating these saltwater fish to a new tank can be a touch tricky for beginners but they respond very well to the drip method.

You should monitor your fish for at least an hour before introducing it to the tank. A single species tank full of colorful corals is the best setup for these feisty little fish. 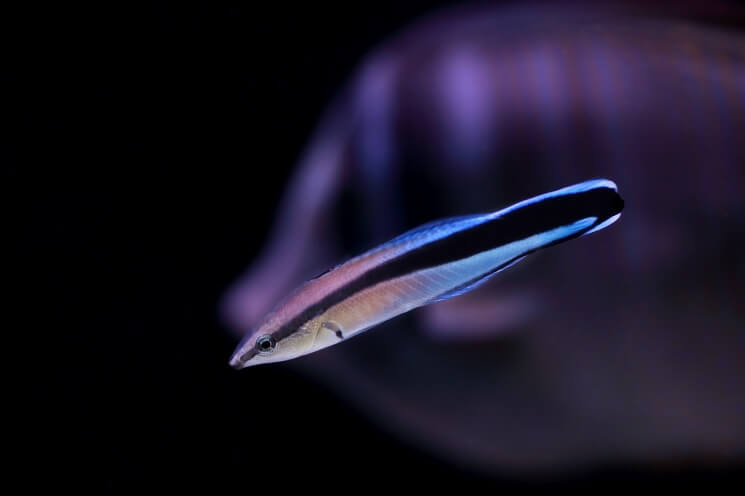 The Cleaner Wrasse is another small fish that will be a big help to your aquarium. Bluestreaks will clean dead skin, parasites, and dirt off of the scales of your other fish. You might spot them cleaning the open mouths and gills of the other fish in your tank too.

This fish is only about 5 inches long but they need a large tank (50+ gallons) to accommodate their underwater acrobatics. You can catch them doing all sorts of flips, twirls, and other tricks in your tank. One unique trait of this little Wrasse is their ability to change its sex. This is known as protogyny and is very common amongst this family. 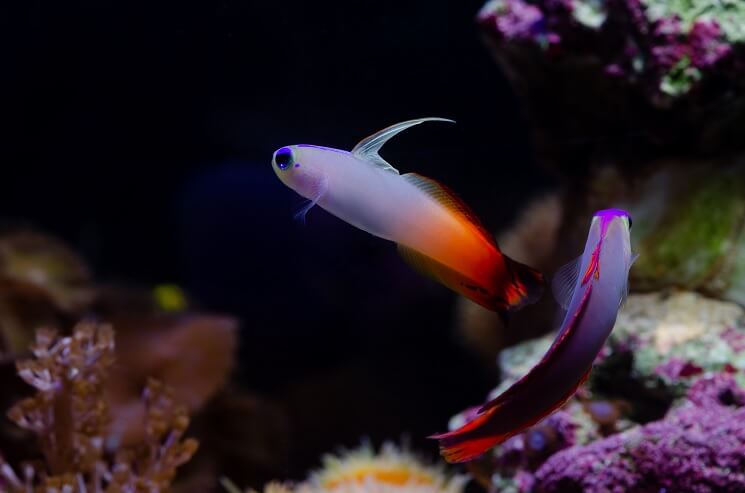 This little fish looks like a candle flame but the first thing you are likely to notice is their unique dorsal fin. Their dorsal fin is used as both a signaling beacon and a defense against predators. When they hide in a crevice, the long fin makes it difficult for a predator to pull them out.

Unfortunately you are not very likely to see this shy fish out in the aquarium. They are very skittish and spend most of their time hiding.

Unlike freshwater sharks (like Rainbow Sharks) the Cat Shark is a genuine cartilaginous shark from class Chondrichthyes. The Banded and Bamboo Cat Sharks are the most popular.

They grow up to 2 feet long so they need at least a 300 gallon tank. In an aquarium they will spend most of their time at the bottom of the tank so you can safely keep them with fish that stay at the upper and middle levels. 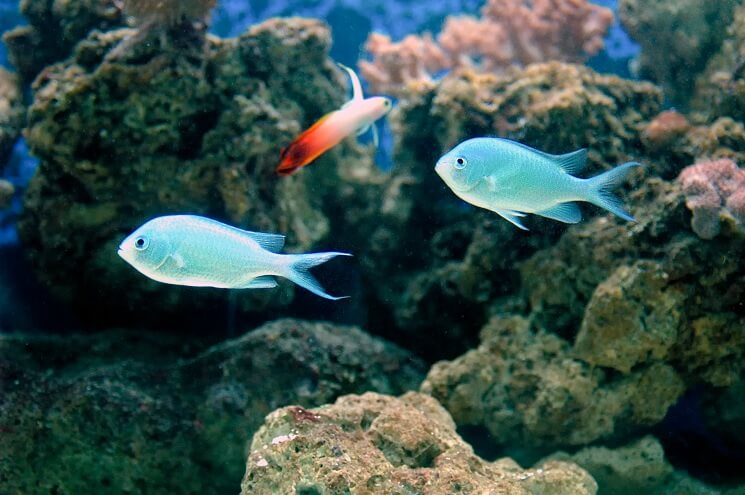 While Damselfish are known for their aggression, the Green Chromis is an exception. This Damselfish gets along with almost anyone. They are extremely beginner friendly and reef compatible which makes them perfect for those who are looking to stock their first reef aquarium.

Clownfish and Royal Grammas are their best tank mates. These saltwater fish are happy in a shoal of about 6 so make sure that your tank size can accommodate them all. 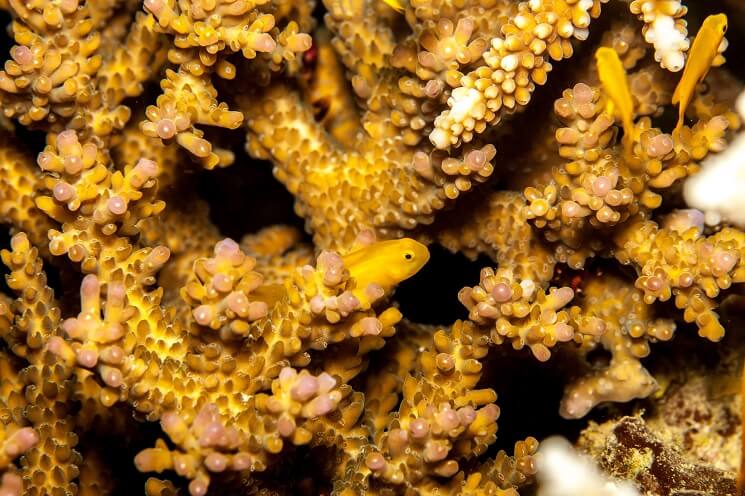 Gobies are among the tiniest fish in a reef aquarium. What they lack in size they make up for with their vibrant colors.

The Clown Goby is neon yellow and will stand out even in a aquarium full of bright corals. If you want to keep a marine nano tank then the Clown Goby is one of your best options – they can thrive in a tank as small as 10 gallons. 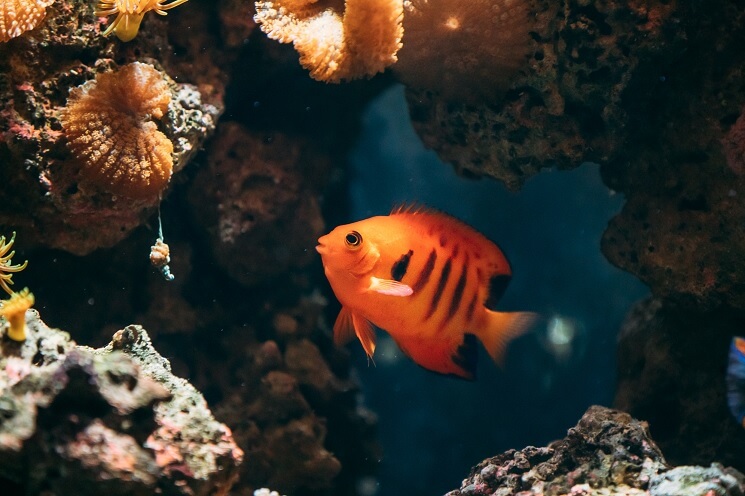 The Flame Angelfish is one of the most radiant of the dwarf Angels. They have a brilliant red and orange hue with black markings. Interestingly their exact color will depend on where your Flame Angel comes from. Those from the Hawaiian Islands are deeper red than those from the Indo-Pacific. You need to keep this saltwater fish in a species group of 3 or 4 or they will bully the other fish in your aquarium.

Algae is an important part of their diet, so make sure that there is plenty of it available in your tank. You should also offer pellets or flakes with a high algae content. 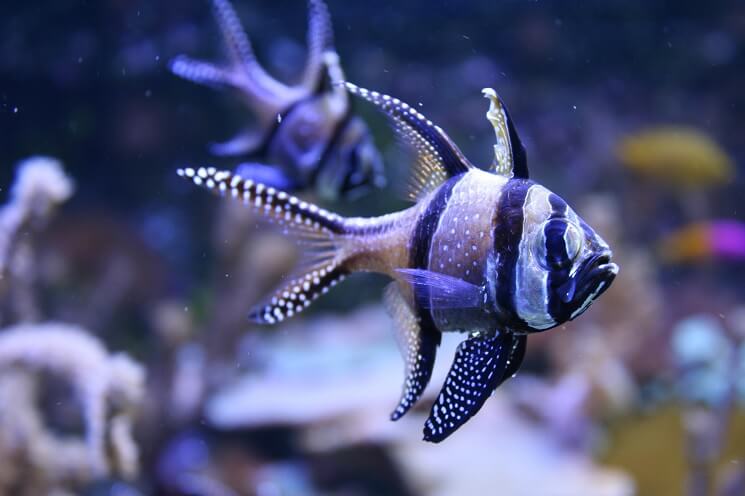 The saltwater Cardinal Fish should not be confused with the freshwater Cardinal Tetra. Banggai Cardinal Fish is a banded reef fish endemic to Indonesia. Their unique combination of zebra stripes and white spots are sure to help them stand out as the star of your reef aquarium.

In the wild they shelter in sea urchins so make sure to keep plenty of these in your tank. You cannot keep a group of these territorial fish together but they can live with Gobies, Wrasses and Angelfish. 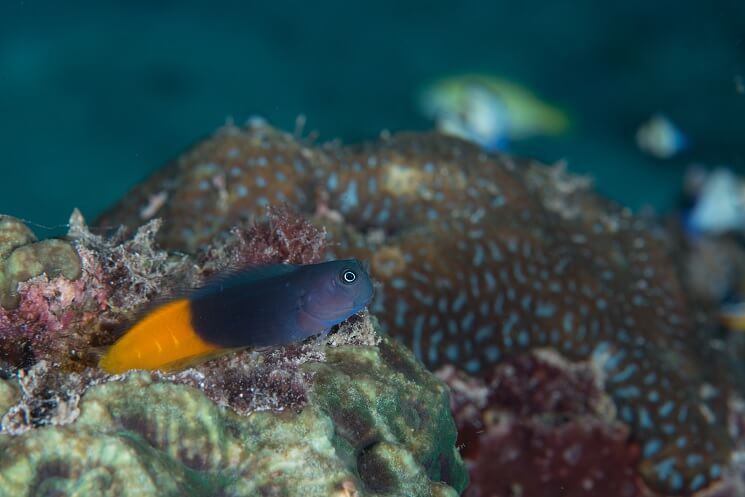 Blennies come in all kinds of colors and one of the most magnificent is the Bicolor Blenny. The caudal side of this fish is dark brown, while the dorsal side is a striking orange.

They are very useful algae cleaners and will help to prevent algae in your tank from coating your rocks, corals and glass. This little fish can fit in a tank as small as 30 gallons and enjoys eating micro-prey and flake foods that are high in algae content. 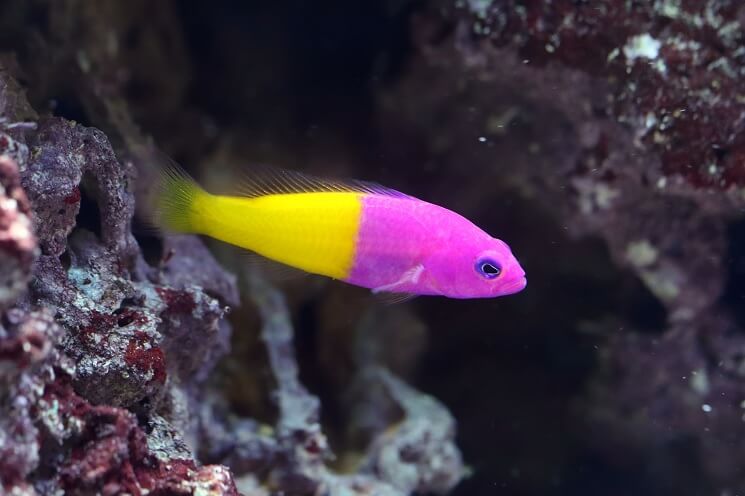 Dottybacks are small but fierce fish that can be big bullies to the others in your tank. For the most part Dottybacks are just very shy and want to keep to themselves, but will go after any fish that intrude upon their territory. They will even go after other species within their family. Only very specific fish can share a tank with these feisty critters. Try the Oblique Line or Magenta Dotty if you are looking for one to add to a community tank. 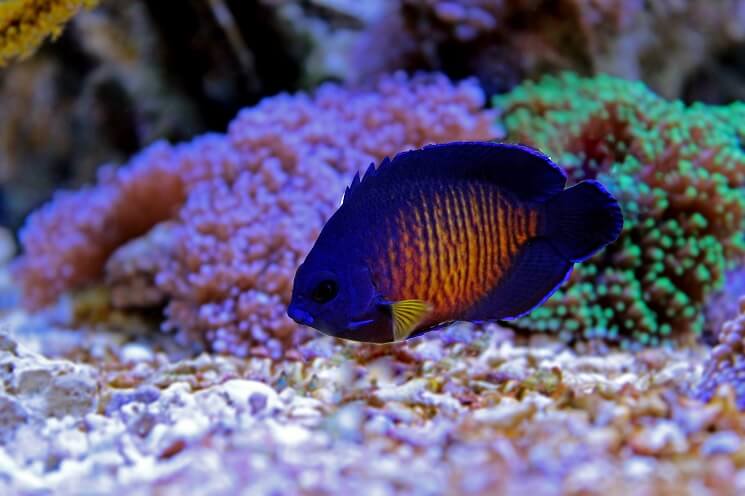 The Coral Beauty is one of the most colorful dwarf Angelfish. They come in radiant orange and blue and grow up to 4 inches long. Although most Angelfish are territorial this one is one of the more peaceful species. These saltwater aquarium fish eat a mixture of algae and small prey, so they can be a big help for keeping algae off of your corals – they can do this without harming the corals too.

Do you want an aquarium full of eye catching fish? The Orange Back Fairy Wrasse is one of the best to add to your collection. This little fish is three colors: orange, purple and blue. The colors can vary across individuals and will change depending on the fish’s mood. If you want your wrasse to look their best then you should feed it a varied diet of meat and greens.

Like most other Wrasses they are small but very active, so you will need at least a 55 gallon tank. A 75 gallon aquarium would be better. A single Orange Back surrounded by peaceful community fish is more than enough to draw attention to your tank. 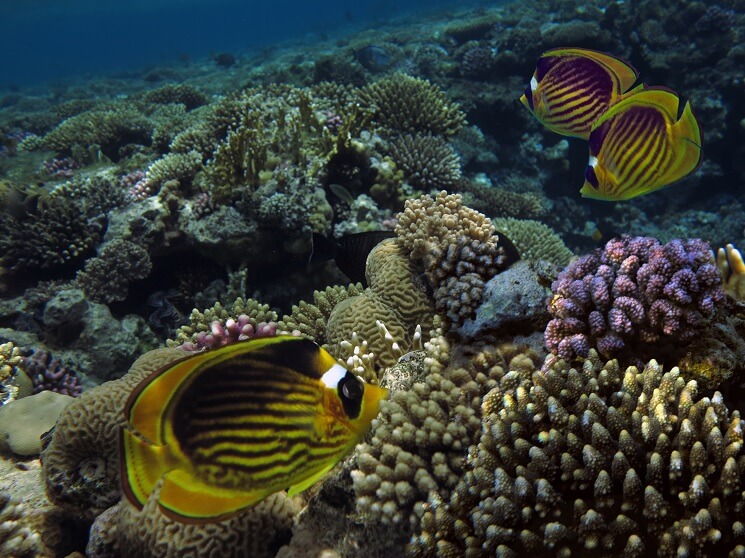 You might see this bright yellow fish in a coral reef exhibit at an aquarium but they are not very good for reef tanks. Like many other Butterflyfish, they tend to damage corals. If you do keep them with coral then make sure that you offer plenty of other foods to stop them from eating them. 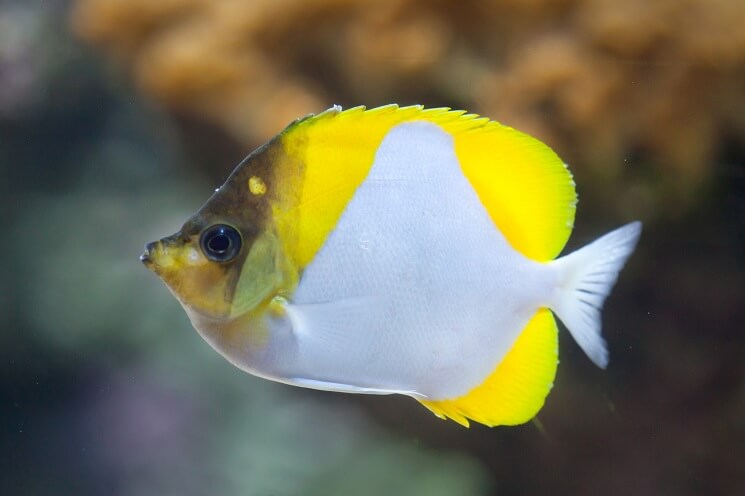 While marine fishkeeping may be more difficult than freshwater fishkeeping, it is incredibly rewarding. We have listed 21 of the best fish for stocking a beginner’s saltwater aquarium. With so many beautiful saltwater fish to choose from, you can create your own personalized watery world.

Just remember that marine fish may look lovely when up against a colorful cluster of corals, but do not assume that every fish is aquarium reef friendly. For many species, coral is on the menu and they will eat it.

The Jack Dempsey Fish is a shining and shimmering Central American Cichlid. Without a doubt they are one of the most popular freshwater fish in the world. While they may be beautiful, they are also quite a handful. Their aggressive Read More →

A community tank is often the crowning jewel of any fishkeeper’s collection. One of the most important steps in setting up a community tank is picking compatible fish. A good community fish is one that has a calm and peaceful Read More →