The Chinese Algae Eater is one of the best algae eaters around.

If you have problematic algae in your tank then this fish is here to help.

They will eat every type of algae and will even snack on any pests that happen to make their way into your aquarium.

This tank janitor will fit right in to your aquarium community. They make an excellent bottom dweller for a tropical freshwater biotope.

Are you considering adding a Chinese Algae Eater to your tank?

What is a Chinese Algae Eater? 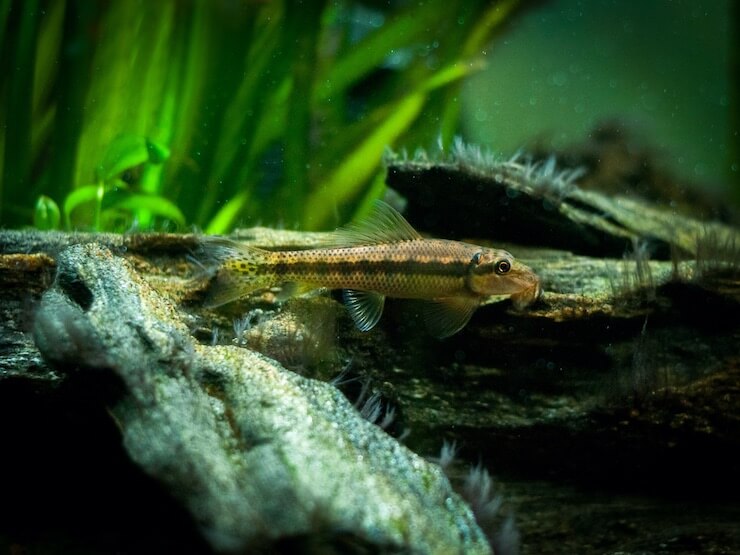 Although they are commonly known as the Honey Sucker, or Sucking Loach, they are not a true Loach from the Cobitidae family.

Another interesting fact about their name is that they are not native to China.

They are one of the best algae eaters around and will eat all kinds of algae, from phytoplankton to hair algae to black beard algae. Chinese Algae Eaters will also eat detritus, particles, and tiny pests that make their way into your tank.

Young specimens are docile and rather timid, but they develop an aggressive streak as they get older. Thankfully, they will not pick fights with fish in the middle and upper levels of the tank. 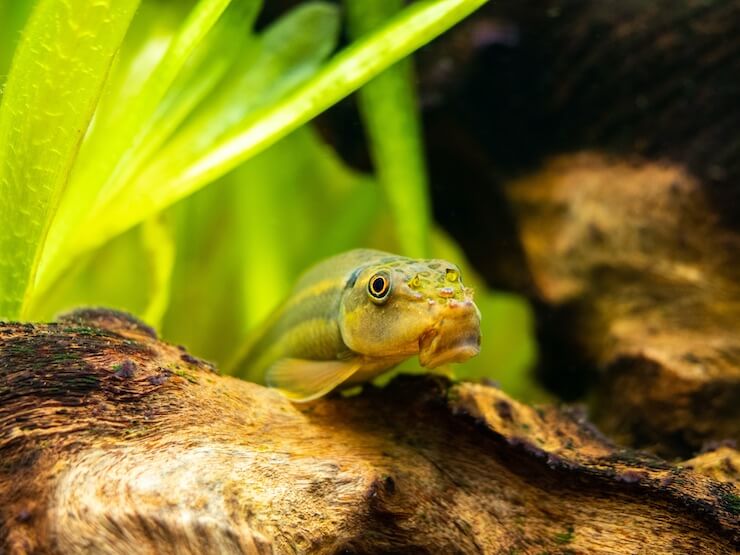 Although the Chinese Algae Eater is not a true Loach, they very much look like one.

They have a long, tubular body with a flat underside.

Their sucker mouth is similar to the Suckermouth Catfish and is positioned directly underneath the fish’s head. The sucker is mainly used for rasping algae off of hard surfaces, but it can also be used to climb and pull up onto rocks and logs.

In the wild, this fish often reaches a length of 10 or 11 inches. However, in aquariums they tend to only reach between 6-7 inches.

As for their fins, Chinese Algae Eaters have 7 fins which are modified for bottom swimming rather than free swimming. 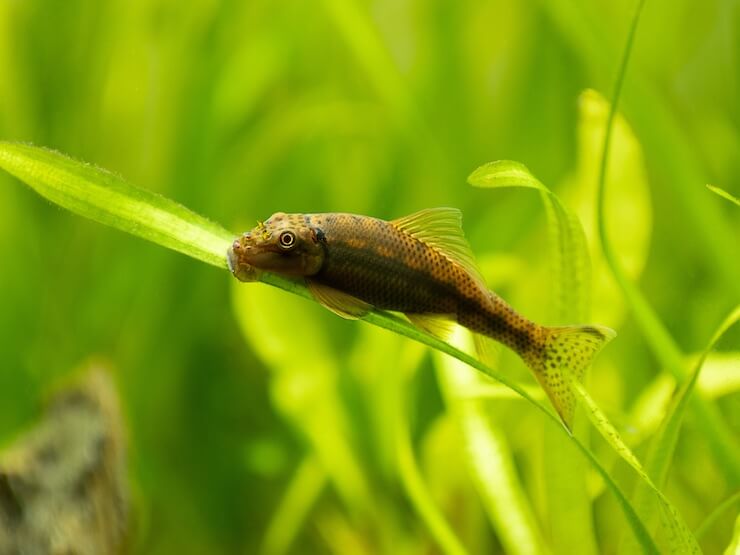 Chinese Algae Eaters are fairly easy to care for, but their aggression can sometimes be difficult for beginners to deal with.

Before adding them to your tank you should wait for the tank to develop a layer of green over the glass, substrate, and decorations. Without algae, there will be nothing for them to eat.

One of the key things to pay attention to is the water quality.

They are very sensitive to the presence of nitrates in the water. Even small amounts can pose a big problem, so the tank should be completely clean before you add your fish. The tank must be cleaned once a week, taking special care to remove rotted plants and decorations. Make sure that your filter is in good working order, and test for nitrates frequently.

Although they are generally healthy they can carry a nasty parasite.

The parasite infects the fish’s liver, gallbladder, or gills. Mild infections do not have any symptoms, but as the illness progresses, you may notice some discoloration and a few bumps and cysts on their scales.

They may lose their appetite and drop weight rapidly, and you may notice some lethargy and poor coordination while swimming.

Unfortunately, the infection is fatal and there are no treatments.

The best way to avoid parasitic infections is to maintain a strict quarantine program for new additions to your tank.

In the wild Chinese Algae Eaters will eat biofilm, detritus, small worms, and larvae in addition to algae.

For the most part they will sustain themselves on the algae that grows naturally in your aquarium. This includes algal mats, hair algae, beard algae, and phytoplankton. If your tank is low on algae then you can feed them algae wafers or toss in a few Marimo Moss Balls.

Outside foods should only be given a few times a week. They include bloodworms, water fleas, brine shrimp, and other live prey.

Insect larvae, peas, spinach, and lettuce are good options too.

If algae is low in your tank, you may need to provide algae wafers on a daily or every-other-day basis.

The fish will come out to eat whenever there is food available so there is no need for a feeding schedule.

For the first 2 years of their life they will be peaceful and timid.

However, as they get older they tend to be more aggressive.

They tend to be quite aggressive to anything that gets in their way at the bottom of the tank. For this reason, they should be the only bottom dweller there.

Chinese Algae Eaters enjoy being on their own and do not like to be disturbed by others.

When other fish swim by, the Algae Eater may mistake their slime coats for biofilm, and attempt to clean it off.

Although they are quite sluggish, they do have an impressive climbing ability. They will use their sucker to pull themselves up on high surfaces, and can sometimes be spotted all the way at the top of the tank. 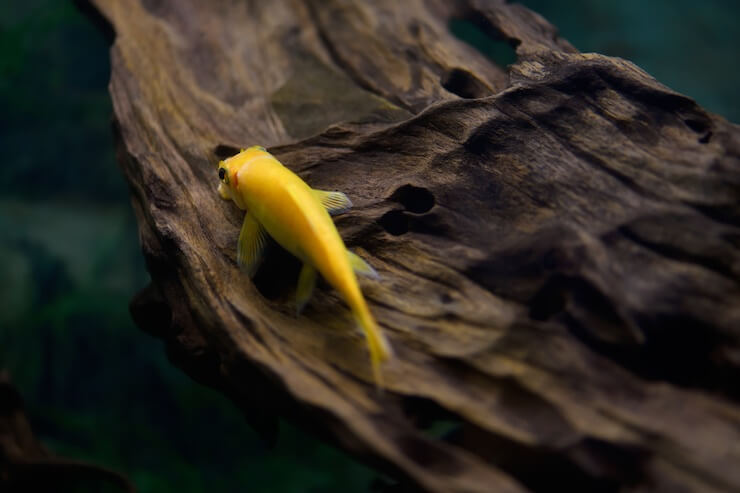 In the wild Chinese Algae Eaters live on their own and prefer to stay out of the way.

You must make sure they have the entire bottom level of the aquarium to themselves.

If you do want to keep them with tank mates then fast-moving fish that live in the middle and upper water columns are your best option.

Fish that travel in schools or shoals are safe from this algae eater’s nuisance behavior. You can safely keep a school of Zebra Danios, Diamond Tetras, or Emperor Tetras in this community.

You can also keep shoals of small livebearers, such as Mollies, Platys, and Swordtails. Cherry Barbs, Dwarf Gouramis, and Sparkling Gouramis make great picks as well.

Do not overcrowd the bottom, and avoid bottom-dwelling fish, shrimps, and snails. You should also keep away any other Algae Eaters like the Siamese Algae Eater and Flying Fox. These fish are known for being territorial.

Flat-bodied fish such as the Angelfish and Silver Dollar are at risk of having their slime coats sucked on.

You should also avoid keeping Chinese Algae Eaters together.

When kept together they will fight for territory at the bottom of the tank. This becomes especially dangerous if there are many individuals of different sizes. Because they cannot be bred in captivity, there is no real reason to add another one to your tank.

In the wild these fish are found at the bottom of rivers and streams. They use their sucker mouths to cling to rocks and substrate in areas with moderate to high flow.

Chinese Algae Eaters will stay in areas with lots of algae. They prefer clear waters with full light penetration, which helps the algae to grow.

The riverbed is usually soft sand or mud, layered with rocks and cobbles that have been swept in by the currents.

These fish will shelter behind rocks, under logs, and under large tree roots. When underwater plants are around, they will make a home under these as well.

To recreate these conditions at home you will need a 50 gallon aquarium for a single specimen.

These fish are not heavy waste producers, but they still need a powerful filter to remove excess nitrogen. You should use an under gravel filter or an internal filter with adjustable flow.

The water should flow with moderate to high currents.

Water should be clear enough for light to reach the bottom, and a light intensity of about 4 watts per gallon is ideal. Keep the tank exposed to light for around 10 hours per day to help with the algae growth.

Because the Chinese Algae Eater is a bottom dweller you want to avoid using a rough substrate.

These algae eaters will munch on all of the algae they can find, but they will not disturb aquarium plants. You can include any rooted or anchored plants you want, including Java Fern, Hornwort, and Marimo Moss.

Unfortunately there have been no recorded successful attempts to breed the Chinese Algae Eater in a home aquarium.

There are many reasons why you should not try to breed your Algae Eaters.

For one thing, their aggression makes them difficult to keep together. It is also quite difficult to tell the difference between the genders.

Breeding them also requires a very large breeding tank with expensive equipment to maintain it.

At a professional fish farm they will select breeding pairs once they reach sexual maturity at age 3. They are then placed in a 100 to 150 gallon breeding tank with a heater and water pump.

The temperature is increased by 2°F per day until it reaches 80°F. The male and female are fed a diet of bloodworms, brine shrimp, and other high protein foods. At this point the female is injected with hormones to induce breeding.

When she is ready to breed her abdomen will swell up and the male will develop tiny white tubercles over his snout.

The two will build a nest under a leafy plant and the female will lay up to 4000 eggs at a time. Not all of these eggs will be fertilized though. Viable eggs will turn from white to clear. It will take 2 days for the eggs to hatch and the fry will immediately start eating algae as soon as they lose their yolk sacs.

Unfortunately there is not a lot of historical information known about the Chinese Algae Eater.

What we do know is that they were first reported in 1883 by Gilbert Tirant.

They were initially classified as a Hillstream Loach in the Homalopteridae family.

However, a DNA test confirmed that they did not belong to Homalopteridae, and they became a member of the newly discovered Gyrinocheilidae family in 1905.

It is not known when they first entered the aquarium hobby, but by the 1990s they were starting to gain more and more popularity. It was during this time that they became the flagship species for the Gyrinocheilus genus in aquariums.

Although they are not quite as popular as the Siamese Algae Eater, they are well known for being very efficient. They are often the aquarist’s first go-to when an algae problem occurs.

Although the Chinese Algae Eater is not as well-known as the Siamese Algae Eater, they have gained a small amount of fame as an efficient tank cleaner.

They will happily eat the algae that grow over your substrate, decorations, and aquarium glass.

With a Chinese Algae Eater around, you will never have an algae problem in your tank. This scavenger is very good at what it does.

Although they are not too difficult to care for, their aggressive tendencies can be tricky at times for newcomers. When kept in the right community they are perfectly manageable.

As soon as algae starts growing in your tank, your Algae Eater can move in.

Do you have any questions about this fish? Let us know in the comments section below…

The Iridescent Shark is not really a shark at all. This gigantic fish is actually a type of river Catfish! Despite their size this is a peaceful and docile fish. However, they must be taken seriously. They should only be Read More →

When you think of a Pufferfish you probably think of a spiny saltwater fish that blows up like a balloon. However, the Pea Puffer is a rare freshwater Pufferfish. They can still puff up however they are not poisonous like Read More →

Comet Goldfish All You Need To Know: Size, Varieties and More…

The Comet Goldfish is a very common species of goldfish that is kept by millions of people across the world. They are well loved for their charming personality and stunning color. This fish comes in a variety of colors ranging Read More →