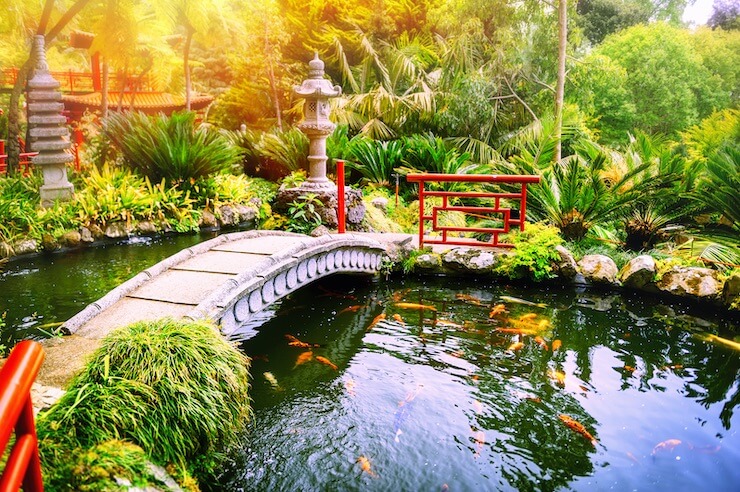 Have you ever seen a pond full of colorful Koi fish? This beautiful Asian carp is the single most popular choice for outdoor ponds! Their mystical appearance is noted in the artworks, myths, and legends from their homeland. They are one of the oldest captive fish and have a history dating back over a thousand years.

The domestication of the Common Carp began on rice farms in China. These Carp were imported to Japan by Chinese invaders and given the name Koi, or Nishikigoi. Koi is simply the Japanese word for carp, so it is rather redundant to call this fish a Koi carp. Now the Koi fish is highly revered in both Japan and China.

The myth of the Koi and the waterfall emphasizes the creature’s strength and perseverance. It became a symbol of tranquility as well as determination.

In the 1700s these colorful carp were raised on rice farms and they were used for weed and insect control. However, over 1000 years ago Chinese invaders imported Koi fish to Japan and it was here that they were given a new purpose.

In Japan genetic mutations produced the beautiful red and yellow colors that Koi are now known for. Koi was promoted from a food source to a pet. In the 1830s crossbreeding and artificial selection produced even more attractive markings and scale patterns.

By the late 19th century westerners visiting Japan were also captivated by Koi fish. They took them back with them to their home countries where breeding and rearing continued. Koi became a popular pond mate for large Goldfish and remain the single most popular pond fish to this day.

Koi fish as we know them do not occur in the wild. You will not find the beautiful colors and patterns on a wild Koi that you would find on a captive one. Koi are special domesticated versions of the wild Common Carp (Cyprinus carpio). Originally found in Europe and Asia, this fish now occurs in freshwater habitats all over the world.

The wild Common Carp is not very much to look at. Its color ranges from grey to dull bronze. However, every so often a genetic mutation will produce a red or gold color on a wild carp. Breeding for these mutations in captivity resulted in the beautiful colors that we see in domestic Koi.

The Most Expensive Koi Fish 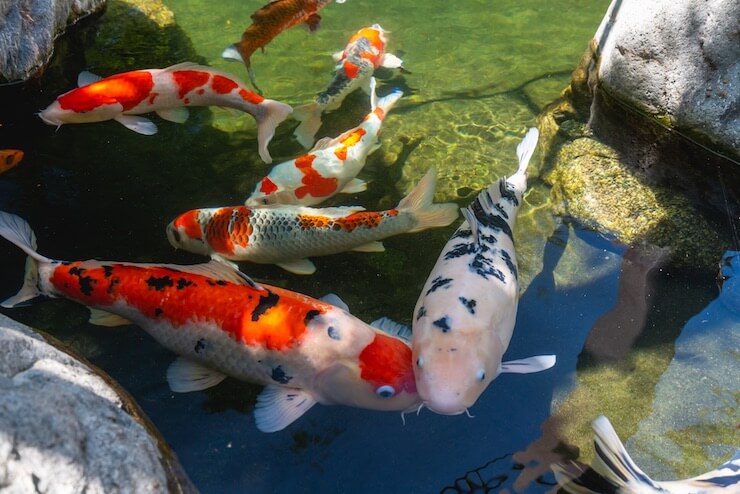 The four most expensive Koi varieties are:

Asagi Koi fish are very difficult to breed and are highly desirable – this creates a low supply and high demand. As a result a quality specimen can cost between $750 and $1000. Metallic gold Ogon Koi are $100 at the very cheapest and $1000 at the highest. Platinums run from $500 to $1000.

The Hi Utsuri is a very rare variety that features deep red markings over a black base color. If you can find one then you will likely need to pay between $600 and $800 for it. The most expensive Koi fish ever sold was a female Kohaku. A three foot Kohaku named S Legend was sold for 1.8 million dollars in Japan in 2017.

A healthy Koi fish can live for up to 40 years. However, on average Koi live for 15-20 years. The oldest living specimen is rumored to have made it to the age of 230. In the wild the Common Carp only lives for 10 to 12 years. Wild environments present unique dangers that do not occur in captivity.

For example in the wild carp are forced to compete with their own species and others for food and resources. They may also fall victim to predators or become infected with diseases and parasites. In captivity these dangers are eliminated and Koi can receive the highest quality diet and medical care. This contributes to a longer lifespan.

How Big Do Koi Get

There is a reason why Koi are only suitable for outdoor ponds! Their size. Koi fish can grow up to 3 feet long. Koi are specifically bred for their size by selecting the largest breeding fish. The larger the parents are, the larger the offspring will be, on average.

Standard and Butterfly Koi can reach 1.5-2 feet long and weigh between 10 and 15 pounds. You can also find Jumbo Koi that reach a maximum length of 36 inches and a maximum weight of 24 pounds. 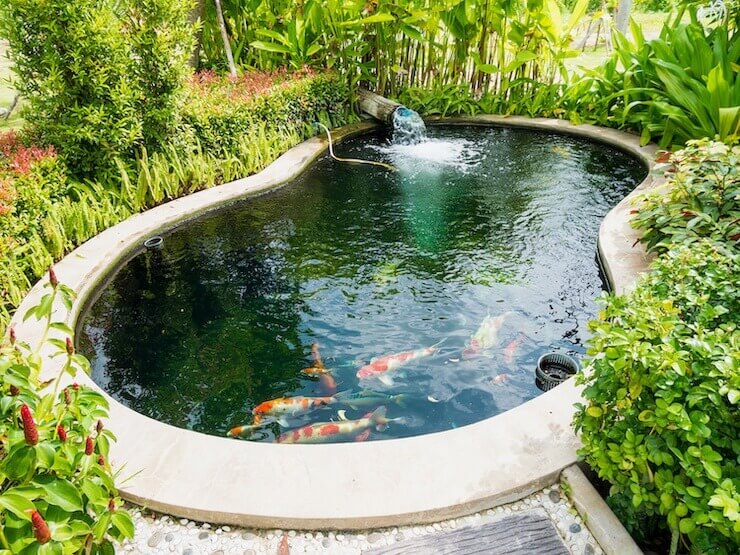 Did you know that there are more than 100 different types of Koi? Most Koi are the results of crossbreeding and artificial selection. The Kohaku, Sanke, and Showa are the most common varieties. Here is a list of types of Koi and their coloring:

Other especially rare varieties include the black and red Hi Utsuri, the solid silver Gin Matsuba, and the blue and orange Shusui. If a fish’s colors do not fit into any other category then it is considered a Kawarimono.

How Much Are Koi Fish

Koi fish are considered luxury pets and they come with a luxury pricetag. A basic 12 inch Kohaku or Showa Koi will cost $30 to $50. If you want something larger or more spectacular then a Butterfly in the same colors will add about $50 more to your price tag.

Asagis, Platinums, Ogons, and other high value varieties will cost anywhere from $500 to $1000! Also you need to remember that the price of the Koi itself does not include the price of its care. This includes pond installation, food and equipment. Installing a new garden pond can cost up to $1500, but you can use a plastic pond as a more affordable option.

What Do Koi Fish Eat

A proper diet is absolutely vital for a long and healthy life. The best diet will deepen your Koi fish’s colors and can even increase the number of offspring if you are breeding them. Common Carp in the wild eat underwater plants and their seeds, algae, and small live prey. They are excellent at clearing snails, shrimp, worms, and insects. They will also eat fish eggs and larvae, and even carrion.

It is a very common misconception that Koi need a high protein diet. In reality feeding them too much protein can be bad for their health. You should feed your Koi a blended formula. High quality brands can be quite expensive but they are worth investing in to make sure your fish gets the best possible nutrition.

Most of their diet should be made up of pellet foods, but you can also offer live or frozen prey as a treat. Polychaete worms, earthworms, crickets, flies, and feeder shrimp are all good snacks. So too are cucumbers, lettuce, cabbage, oranges, and cantaloupe.

In temperate ponds Koi fish will breed from March through to June. In tropical and sub-tropical areas they breed all year round. The first step to breeding them is to be able to tell the difference between males and females. Females are larger with visibly round abdomens, whereas males are thin and torpedo shaped. Males in breeding condition will develop white spots over their heads and near their gills. These are called breeding tubercles.

Most professional breeders will breed Koi through artificial means, such as hormone injections and artificial insemination. Hobbyists at home may not have access to these methods. You should designate a special space for your breeding pair. You can dig out another smaller pond or use a plastic pool decorated with aquatic plants.

Raise the water temperature up to 65°F and provide meaty foods to induce breeding condition. The male Koi will follow the female around the pond and bump her with his head. Eventually, he will chase her off to a potential spawning site. At this point the male will rub against the female’s abdomen to spawn and fertilize her eggs.

Depending on her size a single female may lay between 50,000 to 100,000 eggs. Once the eggs are laid you can remove the adults and transfer them back to your main Koi pond.

There are several different kinds of fish that make excellent pond mates for Koi fish. Goldfish are among the best and brightest Koi pond mates! Some of the most popular varieties are the Comet and Shubunkin. Shubunkins have similar colors to the Showa or the Sanke so they will complement each other when they are kept together.

In the wild the Common Carp cohabitates with different species of Sunfish. The Redear Sunfish does as well in captivity as it does in the wild. If you need some algae or weed control then consider keeping a Grass Carp. These fish are not only lovely to look at but they can also serve as personal gardeners for your pond.

The Golden Orfe is a beautiful cyprinid that reaches up to 24 inches in length. It will attract immediate attention to your water garden. Golden Orfes are shoaling fish so you will need an especially large space for them. A 1000 gallon pond is a must.

Now you know that there are over 100 different breeds of Koi. The Koi fish is a remarkable fish that is well loved by gardeners, aquarists and aquascapers the world over. In 18th century Japan it was revered for its hardiness and tranquil nature. Now, it is still prized for its beauty, intelligence, and ability to inspire tranquility in its admirers.

Hobbyists working on their very first outdoor pond will usually pick a Koi as their first fish. However, it is certainly not an impulse buy. Even if you seek out the most affordable options the fish is quite expensive to maintain and care for. Not only that but you are facing a potential 40 year commitment to its health and happiness.

However, the financial investment is well worth it for a lovable aquatic pet that will brighten up your garden and your day. We hope you have enjoyed these amazing facts about the most popular pond fish. What is the most interesting Koi fish fact that you have learned?

Convict Cichlid Guide: Is This Convict Fish For You?

The Black Convict Cichlid is a beautiful zebra striped South American Cichlid. They are one of the most commonly kept Cichlids and are often the species of choice for first time Cichlid keepers. Whilst they are easy to care for Read More →

Swordtail Fish are fascinating fish for freshwater aquariums. The Swordtail is a popular type of livebearer that is loved for their colors and community friendliness. They look very similar to the Platy Fish but are identified by their larger size Read More →

Java Moss: Everything To Know About This Marvelous Moss

If you are looking for a natural carpet for your aquarium then the Java Moss is one of the very best. This spectacular moss grows beautifully in low light and it is very easy to care for. Whilst it is Read More →