Goldfish are the world’s most famous pet fish.

They are the first aquarium pet that most enthusiasts keep!

Many people do not realize that there are lots of different types of Goldfish.

It is easy to start a Goldfish tank which makes them a great choice for beginners. Even experienced aquarists will enjoy creating a larger pond setup for them.

This article will cover everything you need when caring for Goldfish. This includes the different varieties, ideal setups, perfect tank mates, Goldfish care and much more… 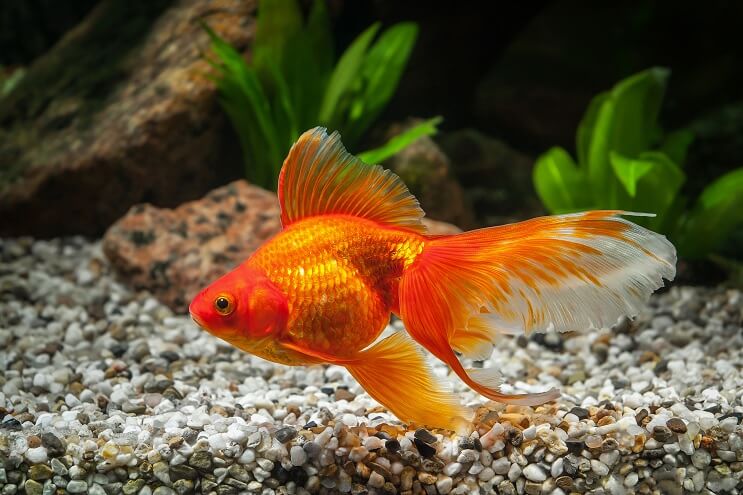 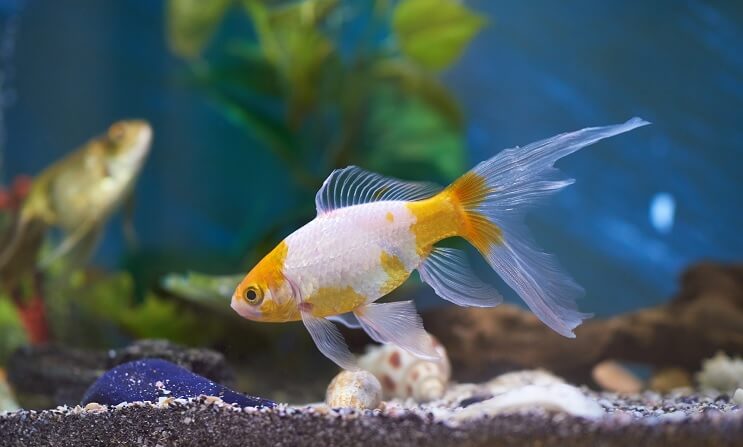 Goldfish (Carassius auratus) are possibly the most popular pet fish in the world.

They are a member of the Cyprinidae family and are native to the cold waters of East Asia.

Goldfish became popular in China over a thousand years ago where they were selectively bred. Because of this selective breeding you can now find many varieties that come in different colors, shapes, and sizes.

As such a popular freshwater fish they are bred extensively and are sold in pretty much every pet store.

You will not struggle to find one unless you are looking for a specific rare variety.

Since they are bred in large numbers you can find them quite cheaply. One Goldfish is usually under $5, but the most attractive varieties will cost much more.

You can expect the common Goldfish to live between 5-10 years if kept in a healthy environment.

Goldfish tend to get on well with other peaceful species.

It is rare for them to display aggression and because of this they are easily bullied by more boisterous fish.

They enjoy the company of their own kind most of all and will display schooling behaviors when kept in groups. This becomes particularly impressive with bigger shoals.

Most of their time is spent swimming in the middle and upper levels of the tank. They quickly learn your feeding routines and will become more active and head to the surface when food is due.

They can even be trained to learn new behaviors and tricks through positive reinforcement. 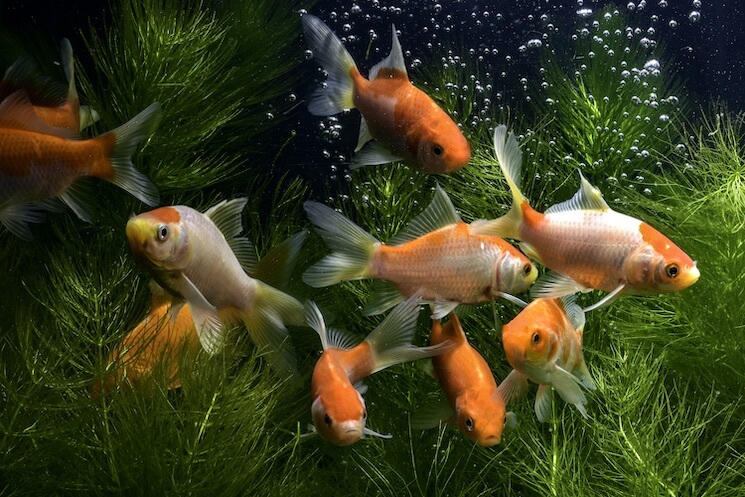 Goldfish have been extensively crossbreed so now they come in all sorts of colors and shapes. This means there is a variety to suit everyone’s style.

They can grow anywhere from a couple of inches to over 12 inches long.

The most common types are the single tailed, slim body varieties. They are available in many different colors such as orange, black, blue koi and albino.

There is also a large group called Fancy Goldfish. This includes many types that each has their own distinctive features.

A popular example is the Black Moor Goldfish who have large round telescope eyes, but surprisingly have terrible eyesight! Other examples include Fantail Goldfish (who have a quadruple caudal fin) and Pearlscale Goldfish (who have domed scales).

Most Fancies have an egg-shaped body and grow up to 6 inches, but a few will reach 12 inches.

If Fancy Goldfish are not your thing then there are more traditional, slim-bodied options available instead. There is the Common Goldfish with stiff fins, or the Comet Goldfish with longer, flowing fins.

Goldfish colors can vary just like the type does.

Orange is very common because that is their stereotypical color.

Whites and blacks are easy colors to find as well. Other colors (like reds and yellows) are available as well if you look hard enough. Blue is the rarest color to find. 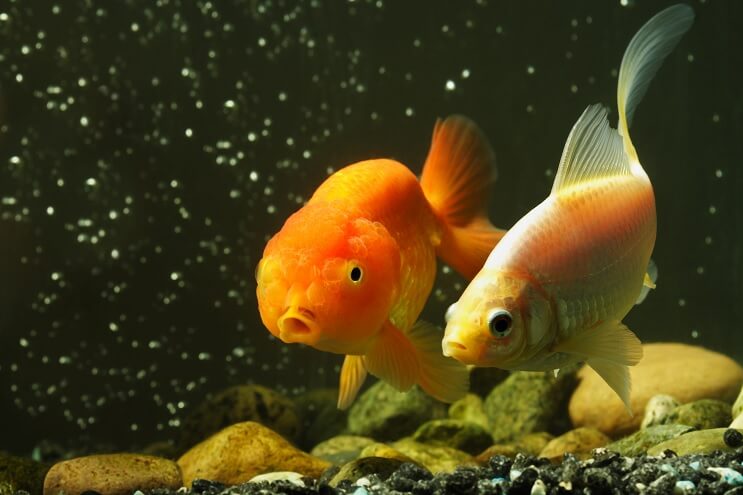 Goldfish have been domesticated to the point where they are not found in the wild and do not really have their own natural habitat.

So when trying to design the ideal aquarium it is best to turn your attention to a closely related species like Asian Carp (which are still found in the wild).

This could be rivers, lakes, canals, or reservoirs.

The water in these habitats is generally slow-moving with plenty of vegetation. The temperature can vary greatly, but pH remains fairly neutral.

If you can recreate this in an aquarium then you will have an environment that your fish can enjoy.

For the substrate you can use sand because it is softer and less likely to scratch them.

Just make sure the substrate is 1-2 inches thick.

Next you will need to add some decorations to act as hiding spots. Live plants work well as they rise up in the water column. Hornwort is a hardy species that can tolerate being nibbled and damaged, so it makes a good pick. You can also try keeping them with Moneywort.

Now for the water conditions.

You should keep the water between 50-75°F. Depending on where you live, you might not need a heater to raise the temperature. pH should be kept at 6.5-7.5.

The only piece of equipment you must have is a filter. This is responsible for removing pollutants and keeping nitrate levels down. Because Goldfish create a lot of waste you will need a canister filter to remove the waste.

Can You Keep Goldfish in a Bowl?

Goldfish are often seen in bowls in films and on TV.

However you should never keep your fish in a bowl.

Each additional Goldfish you add will need 10 gallons. Remember that it is always better to give your fish too much space, rather than too little. 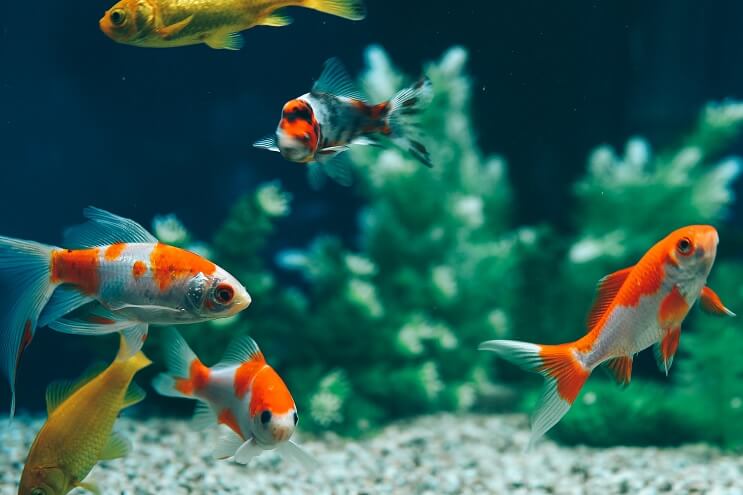 There are many options for tank mates.

The main requirement is that they are peaceful and calm.

These tank mates should also prefer similar water conditions – this will limit your choices slightly as there are a lot more tropical species available than cold water.

Some good shoaling examples are Zebra Danios, Rosy Barbs, White Cloud Minnows, Mollies, and Neon Tetras. Dwarf Gouramis and Angelfish are some bigger options. If you are looking for some bottom-dwellers then you can try Kuhli Loaches, Otocinclus, or Corydoras Catfish.

Shrimp and snails are the most common additions so you could try Ghost Shrimp or Mystery Snails.

There are two main types of fish to avoid: aggressive species and fin-nippers.

Goldfish can be easily picked on by territorial species because they do not have the speed to get away.

Cichlids are a group that contains lots of aggressive species, like Convict Cichlids.

Tiger Barbs are a notorious example.

Most Goldfish enjoy being kept in a species only tank.

They display schooling behaviors and will swim around socially when kept in groups.

It is best to only keep Fancy Goldfish with other peaceful Goldfish varieties because they swim slower so they cannot escape from aggressive fish. 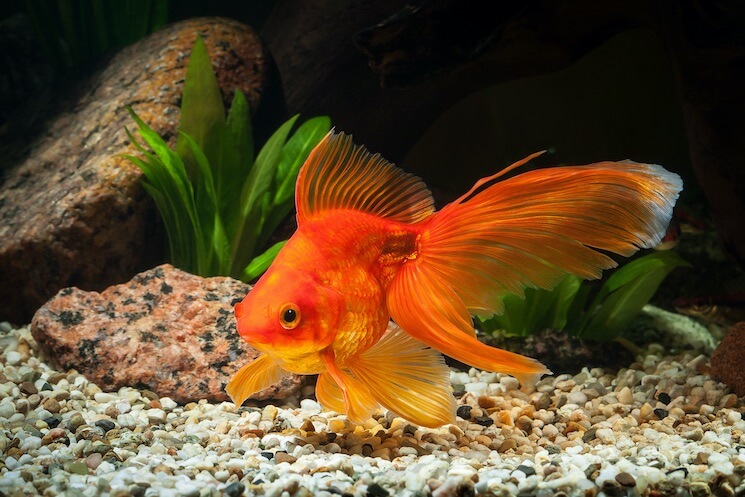 Most Goldfish varieties are easy to care for.

They make a good beginner fish which probably contributes to why they are so popular.

To keep them healthy you will need to regularly clean the tank. This includes performing partial water changes every 1-2 weeks.

If the tank is clean then the most likely Goldfish care problem you will have is digestive problems. You should follow the suggestions we made in the diet section to prevent this.

Even in a clean environment and with a good diet your fish can still sometimes get ill.

Swim bladder disease is a common issue that causes your fish to either float on the surface or sit at the bottom of the tank. You should avoid feeding them for 24 hours and then introduce fibrous foods like vegetables. Then watch the individual closely for signs of improvement.

Skin diseases are common too.

Parasites or bacteria cause symptoms such as spots and color changes.

Fancies are particularly prone to illness because they are much more delicate. Be careful when moving them with a net as physical injury can lead to cuts and diseases. This is one reason why fin-nipping species should be kept separately, since many fancy Goldfish varieties have large fins that make them an easy target.

If you notice that a fish is sick then you should move them to a quarantine tank to hopefully prevent the disease spreading to your other Goldfish.

Goldfish are omnivores which makes them easy to feed because there are so many feeding options.

In the wild they eat both plants and meats including broken pieces of vegetation and small animals (like tadpoles and larvae).

You can buy specific flake and pellet goldfish foods that aim to provide all the nutrients your fish need.

However, dried foods have a lower nutritional value compared to fresher foods (like live and frozen foods). Dried foods should therefore be supplemented with fresher foods to provide a variety of nutrients.

Daphnia, bloodworms, and brine shrimp are a few examples of good live or frozen foods. These are very easy for your Goldfish to digest.

Green vegetables are also good for their digestive system because they are high in fiber. You can add some to the tank if you have any spare around your kitchen.

You should feed your Goldfish twice a day.

Breaking up feeding times like this is another way to help their digestive systems. Give them an amount that they can easily finish within two minutes.

Also make sure to remove food from the tank once they have finished eating. 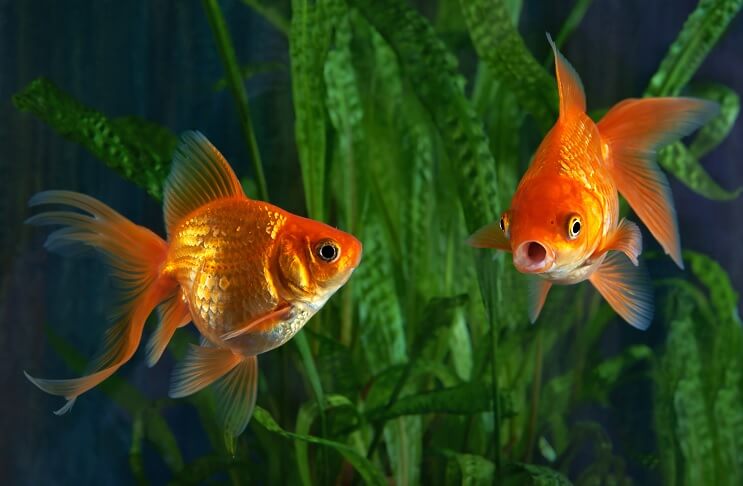 In fact it often happens accidentally because they are so easy to breed.

Goldfish lay eggs seasonally so the best way to trigger spawning is to gradually raise the temperature of their water over a few days.

Try increasing the water temperature 3°F a day, making sure not to raise it above 75°F.

As the water gets warmer the males should start courting the females by circling them. They should spawn after doing this for a couple of days. Once spawning is over a female could lay up to 10,000 eggs and attach them to the walls and decorations around your tank.

At this point you should separate the adults so they do not eat the eggs.

The eggs should hatch over the next few days.

Once the fry hatch they will be too small to eat small fish foods, so you should feed them crushed foods that can fit in their mouths. You can find some store foods that are designed for fry so this should be a safe pick.

Foods high in iron and protein will help to promote growth.

They should be large enough to eat an adult’s diet by two months old and you can re-introduce them to their parents at this point too.

Should You Keep Goldfish? (Summary)

Just about anyone can look after Goldfish.

They are a simple species to care for so you do not need lots of experience. There are just a couple of things that you need to consider.

Goldfish have a low temperature range making it difficult to find suitable tank mates. They are also peaceful and potentially delicate, which means that tank mates cannot be aggressive.

These are things that you need to plan before setting up the tank.

Once the tank is set up to suit them you just need to keep everything clean to keep them healthy.

There are many varieties, from the beautiful Fancies to the more traditional Shubunkin Goldfish to pick from. The hardest decision is working out which type you want.

Which types of Goldfish do you want to keep? Let us know in the comments section below…

David has been keeping fish since he was a child. In his first tank he kept goldfish and since then he has kept over 30 different species. Now he has 4 separate tanks and his favorite is a 100 gallon freshwater tank with a school of Rasboras, Tetras and Loaches.

Everything Fishkeeping is your number one resource for fishkeeping, aquascaping and aquariums.

We were founded with one simple goal in mind: to become the must read website that every aquarist trusts.

Everything Fishkeeping's articles and videos are intended to be used for a general nature only. It is not intended to constitute or replace professional and medical advice. Everything Fishkeeping is a participant in the Amazon Services LLC Associates Program, an affiliate advertising program designed to provide a means for us to earn fees by linking to Amazon.com and any other affiliated sites.