The Black Ghost Knifefish is a truly unique fish.

Their electrosensory system, high contrast colors, and the lack of a classic fish shape will be sure to capture everyone’s attention.

Although these fish are shy they quickly warm up and start to become more showy. Here you can start to appreciate the beauty they can bring to your tank. 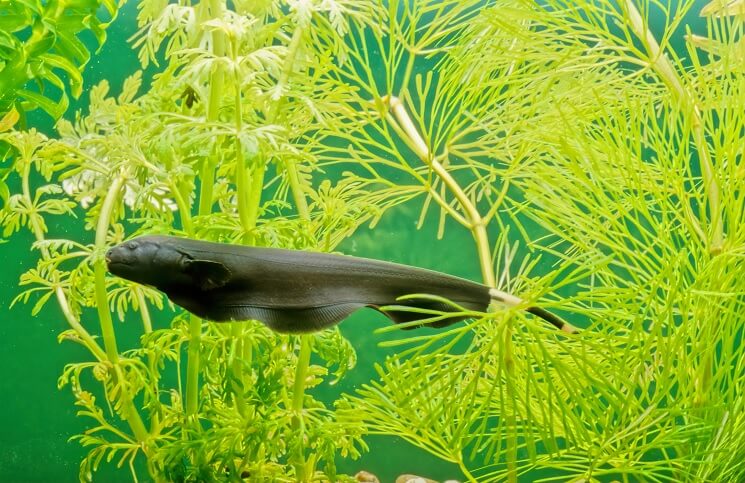 The Black Ghost Knifefish (Apteronotus albifrons) is a tropical freshwater fish from the family, Apteronotidae.

This species is native to South America and lives in the river basins of Venezuela and Paraguay as well as in the Amazon Basin of Peru. They are found amongst dense vegetation where there are lots of hiding spaces.

Black Ghost Knifefish are unique because of their swimming style and electroreception abilities.

They use their bottom fin for movement as opposed to contracting their body and swaying their tail for movement.

As for their electroreception abilities, they are able to send out pulses of electricity to track their surroundings – this also highlights prey and hiding spots. Their ability to use electricity explains the development of their swimming style as bending their body disrupts their electrical signals.

Although they are a predatory species (like Chili Rasboras) they are surprisingly docile towards other species that they do not consider food.

If kept correctly they can live for more than a decade and reach half a meter in length.

Expect to pay around $17-$22 for each Black Ghost Knifefish. 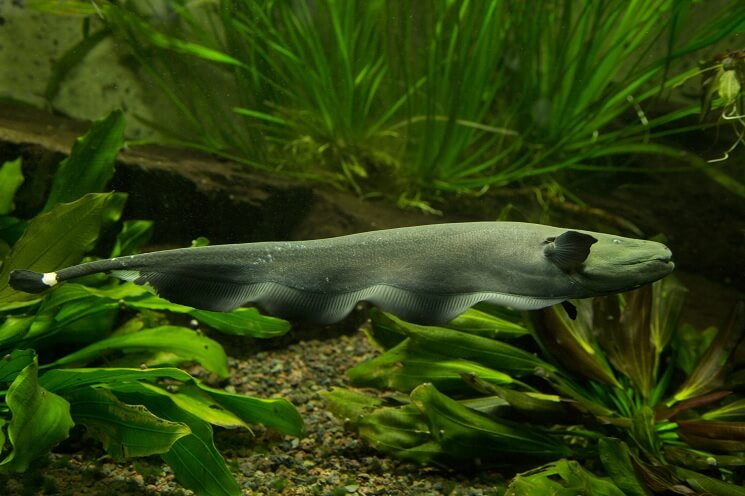 Caring for a Black Ghost Knifefish is fairly simple.

If you give them a varied diet and stable water parameters then they will be happy.

The main thing to consider is that because they do not have scales they are more susceptible to infection. They are especially vulnerable to ich, external parasites, and white spot disease.

These diseases are often traced back to something new which is introduced to your tank. It is important to quarantine any new additions to your tank to make sure they are healthy before being added to your aquarium.

The final thing you need to consider is giving them a varied diet to aid in fighting off infections.

This fish is a carnivore which means they only eat meat.

This means your plants will not be harmed by their fish.

In the wild they eat insects, small fish, and small invertebrates. They will eat anything that is small enough to fit in their mouths.

To replicate this varied diet you will need to feed your fish high quality live or frozen food.

They will love to eat:

Just make sure to give them variety.

One thing to know is that they struggle to eat dry foods. So it is generally best to avoid feeding them fish flakes.

They will need to be fed daily.

As nocturnal animals they should be fed at night and not during the daytime.

You may have seen videos of people feeding their Knifefish by hand. This form of feeding is cathartic but of course takes a large time commitment. Is it not a requirement for feeding this fish so do not worry if you do not have enough time to train them. They will happily eat from the tank instead.

The Black Ghost Knifefish is nocturnal.

This means during the daytime this fish will keep to any hiding spots scattered throughout the tank – keeping a cave for them is crucial.

Also because they are nocturnal their vision is very poor and they tend to use their electric field to find food and navigate the riverbeds. This sense is so well adjusted that they navigate in total darkness.

When they are active they tend to hang around near the bottom of the tank and tend to be quite shy. However this shyness generally wears off after they get used to the environment and inhabitants.

You can expect a peaceful fish despite their large size.

They are only aggressive whilst breeding or towards members of their own species. 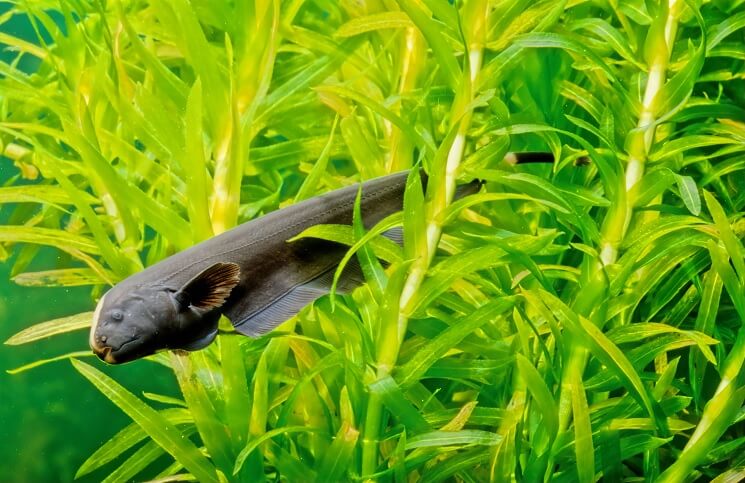 Habitat and Aquarium Set Up

The Black Ghost Knifefish lives in the freshwater rivers of South America.

These rivers are fast flowing with sandy substrates and lots of hiding spots.

This is because these benthic regions are surrounded by foliage which also means they are used to low light levels. These low light conditions help them to hide because of their color. Naturally this fish is very shy and nocturnal, so hiding is a necessity.

Let’s look at how to replicate these water conditions in your home aquarium.

You will need to keep the water heated at around 78°F.

The water flow should be kept at a medium flow.

Once you have mimicked their water parameters you now need to replicate their habitat.

The main thing is providing them with lots of hiding spots. This can include floating plants, sinking driftwood, and other décor. A popular hiding spot for them is a PVC pipe that is wide and long enough to fully hide them.

You can use a sandy or a fine gravel substrate.

Finally you will need to establish a stable day-night cycle. This will help reduce their stress and keep them healthy. As for light intensity you should make sure there is enough light to maintain any plants in the aquarium.

What Size Aquarium Do They Need?

These fish grow up to 20 inches so they need a lot of space to grow and thrive.

You should make sure your floor is sturdy enough to handle this weight. A 120 gallon tank weighs at least 1000lbs once it is fully loaded. 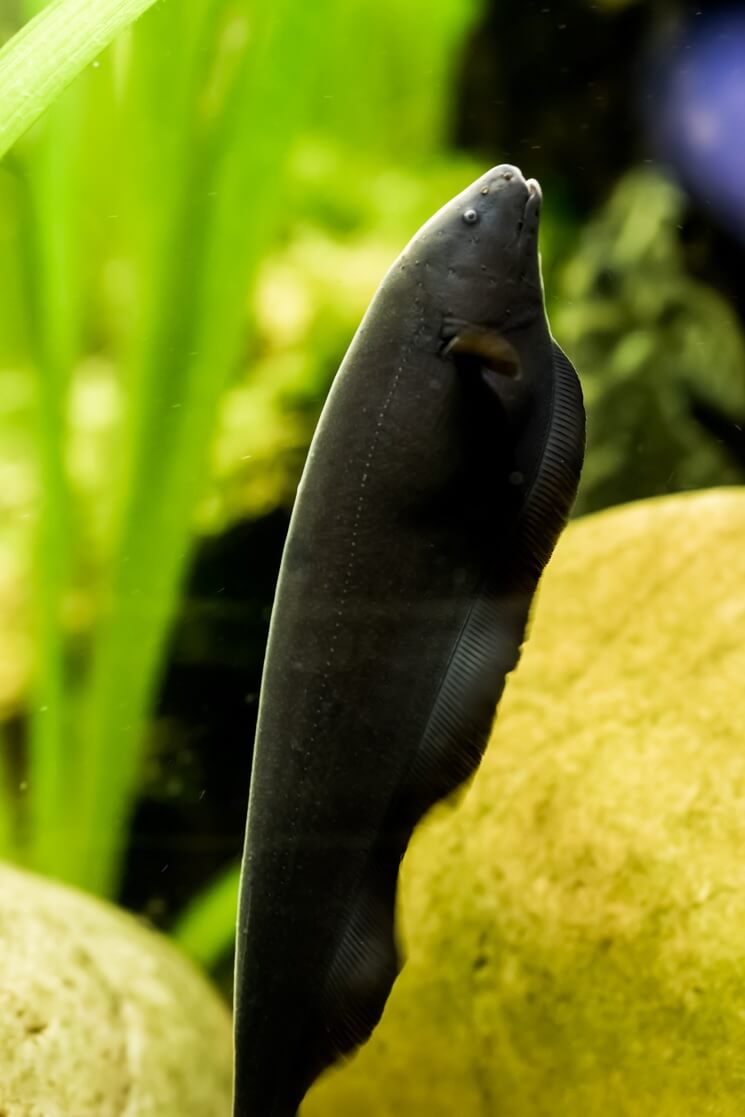 The Black Ghost Knifefish is easily distinguished by their long cone-like body.

They have relatively small pectoral fins and a small to non-existent tail fin.

Once fully grown they can reach 20 inches long.

These fish are mainly black however you will focus on their white coloring.

Some have a white blaze that will extend all the way to the back of the fish. Others will have no such marking and only have the two white colored rings on their tail which can vary in thickness.

There is also an albino morph which is also called the White Ghost Knifefish.

Trying to tell males and females apart is very difficult.

The most accurate method is to measure their electrical output however this is not possible for most hobbyists. Instead look at their snout as males tend to have a longer snout. Whereas females tend to be wider and thicker relative to males.

While the Black Ghost Knifefish is the most popular Knifefish there are several other species available too:

The Black Ghost Knifefish was initially discovered by Carl Linnaeus in 1766.

However it was not until 1800 when Bernard Germain de Lacépède discovered them and named them Gymnotus albifrons and then Apteronotus passan.

Apart from these two documented events not much is known about the history of this fish.

We do know that there is a South American folktale which mentions that souls of the departed reside in this particular fish – this is where their common name comes from.

Throughout the 1900s this fish gained scientific attention because of their electrosensory organ.

It is thought this interest in their electrosensory systems caused their popularity and transition to the fishkeeping hobby. 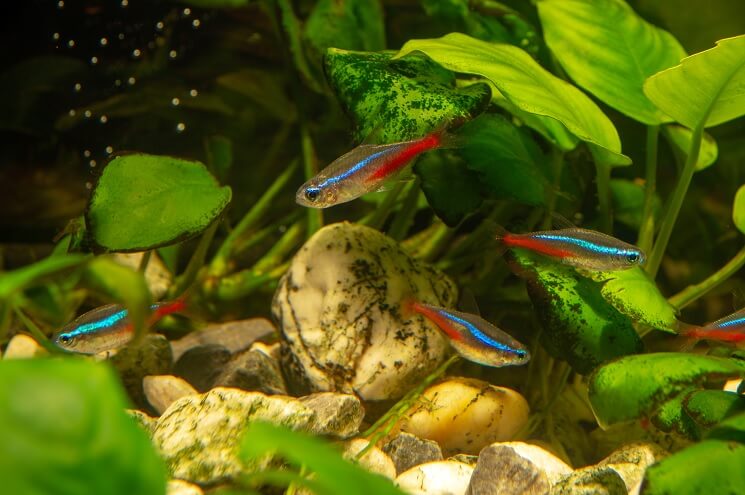 As this species is indigenous to the Amazon it would not be a stretch to introduce species that live in the same region.

Other fish from southeast Asia can also be compatible. Examples include the Giant Gourami, Oscars, and Catfish. Other larger tank mates include the Bristlenose Plecostomus, Clown Loaches, and Bala Sharks.

You will need to make sure that any species you introduce to the tank are the right size (around 6 inches).

Smaller fish species and aggressive fish species should be avoided all together because the Knifefish will either eat them or fight with them.

Because they are a predatory fish they will gladly feast on any invertebrates too.

All shrimps, small crabs, and snails should be avoided.

You should not keep Black Ghost Knifefish together because their electrical signals can get conflicted.

It is best to keep one individual per tank to avoid complications.

You should also avoid other species of Knifefish (e.g. Brown Ghost or Glass Knifefish) as they too emit conflicting electrical signals which will cause distress for the both of them.

Unfortunately it is very difficult to breed Black Ghost Knifefish in home aquariums.

Most of the Black Ghost Knifefish you find at aquarium suppliers are from professional breeding facilities in Asia where they typically use hormones to induce breeding.

However if you do want to attempt to breed them then you will need a dedicated breeding tank.

You will also need to keep pristine water parameters and successfully introduce a mating pair in a single tank. This assumes you were able to successfully distinguish a male and female fish. However most Knifefish are sold unsexed so introducing them in the same tank can be very risky.

Even past this point details about mating and spawning behavior remain elusive.

You will need a very large aquarium with lots of décor and low lighting. Water conditions should also be kept constant to avoid stressing the fish.

However as previously mentioned you will need to do a lot of trial and error and it is best to avoid breeding altogether.

Are you looking for a fish which will capture everyone’s attention?

Then the Black Ghost Knifefish might just be the fish for you.

For those who have a large tank and are wanting to add some variety this fish makes a good choice.

Is the Black Ghost Knifefish in your tank?

There are many different kinds of Pleco Catfish. One of the most popular and helpful is the Clown Pleco. This gentle and peaceful fish is often used to clean up algae and detritus from the bottom of the tank. They Read More →

The Honey Gourami is a sunset-colored Gourami with a peaceful personality. If Bettas are not quite your style then this species makes a wonderful alternative. They are not too big and do not have the same aggression that many other Read More →

Algae can become a big problem in freshwater aquariums. Fortunately we have algae cleaners like the Ghost Shrimp to help – they are one of the best algae eaters around. Whilst they are not the most beautiful, they are certainly Read More →