Are you looking to make a big addition to your aquarium?

The Bala Shark is known for being gentle giants. They are a fun and active schooling species which catch the eyes of many.

If you have a large tank then they make the perfect addition.

Watching a group of them swim together is very entertaining.

In this article we talk about what it takes to look after this species. We discuss diet, breeding, tank conditions, and much more… 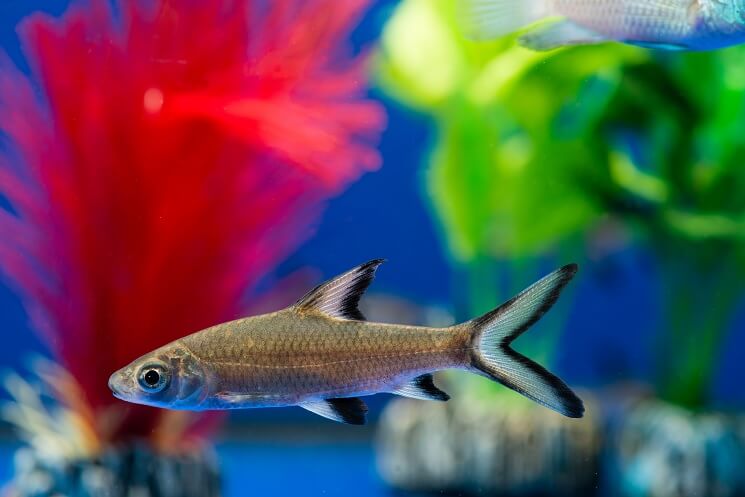 The Bala Shark (Balantiocheilos melanopterus) is commonly known as a Tricolor Shark and comes from the family Cyprinidae.

They are called sharks because their unique, pointed dorsal fin gives them the appearance of a traditional shark.

In the wild they are commonly found in Southeast Asia, in fast-flowing rivers and lakes from places such as Borneo, Thailand and Sumatra. However since the early 2000s they have gained popularity with fish keepers because of their fun and active behavior. This large species will school and put on a show for you in the tank.

Because of their size you should only keep them in at least a 100 gallon tank.

You should expect to pay between $4-$10 per specimen and they are usually purchased as a group.

Overall they would make an interesting addition to most freshwater community tanks. 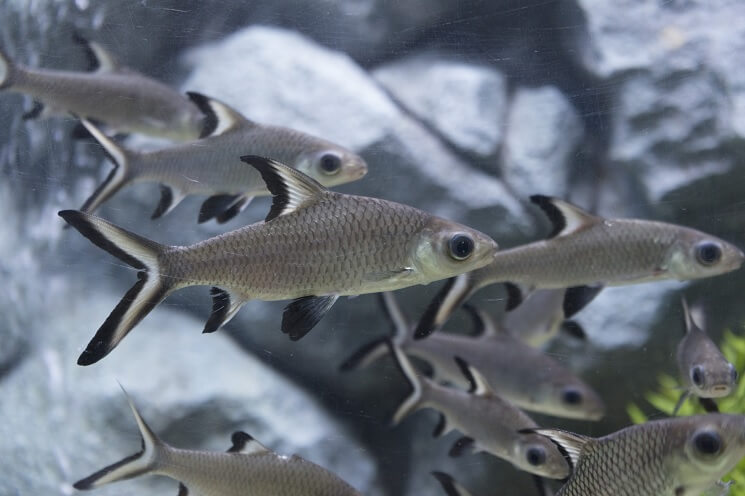 The Bala Shark has a long and shiny silver colored body.

If you watch them close they will shimmer as they swim.

They also have large eyes (which helps them with hunting) and can grow up to 13 inches long in an aquarium.

As juveniles you will struggle to distinguish males from females.

However as they mature there is an observable as females are smaller than males. During spawning seasons, females will also have rounded bellies.

Up until recently the Burnt-Tailed Barb (Balantiocheilos ambusticauda) was mistakenly identified as the Bala Shark. This species has only recently been described due to re-examining specimens collected in 2007 from south-eastern drainages. 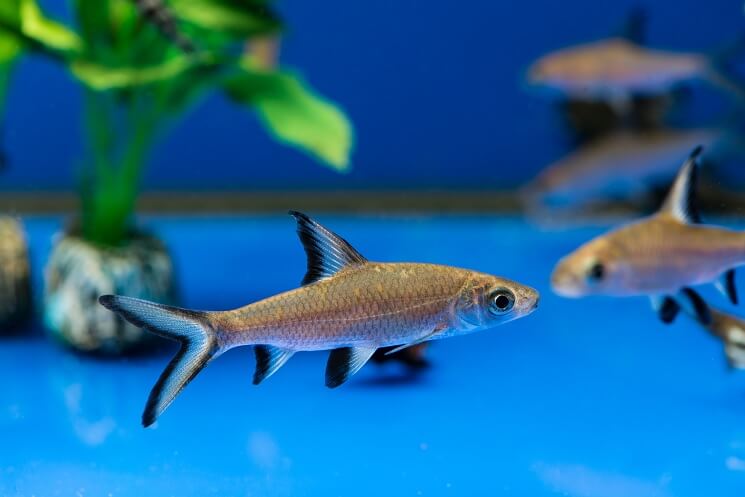 Bala Sharks were first discovered in 1850 by Pieter Bleeker.

During this time their distribution covered Borneo, Sumatra and possibly Peninsular Malaysia.

Nowadays, the extent of their distribution is unknown and wild specimens are actually believed to be extinct.

This species of fish has been part of the fishkeeping hobby for a very long time. In fact fisheries biologists in Thailand believed that their collection from the wild caused wild specimens to disappear way before the 1980s.

Until 2007 they were believed to be the only representative of the Genus, Balantiocheilos.

However, during a re-examining of specimens collected in 2007 a new species (Balantiocheilos ambusticauda) of the Genus, Balantiocheilos was discovered. 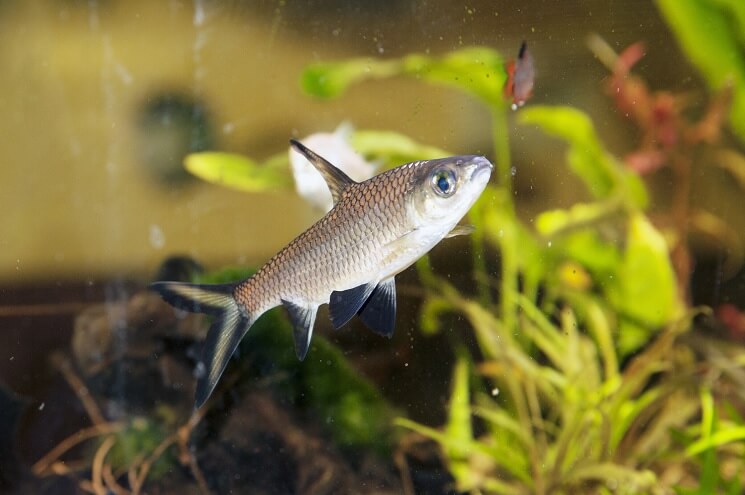 In the wild the Bala Shark naturally occupies medium to large fast-flowing rivers and lakes in Southeast Asia. The full extent of their distribution is unknown, but they have been found in Borneo, Thailand, and Sumatra.

These rivers have a muddy substrate and are full of biodiversity.

As pelagic species they will occupy the middle depth of the water column.

In this habitat they would eat insect larvae, small crustaceans, algae and other plant matter.

Now we will explain what tank conditions best replicate their natural environment so you can make the perfect home.

A single Bala Shark should be kept in a 100 gallon tank.

However it is not recommended that you keep this fish on their own, they will need to be kept with at least 3 other Bala Sharks.

You will need a 150 gallon aquarium that is around 5 feet long.

They thrive when the water quality is kept consistent – they do not do well with fluctuating conditions.

They are used to fast-flowing rivers and streams so it is best to have a very good and powerful filtration system to recreate the medium to heavy water flow. It is best to over-filter the tank to mimic the clean water they are used to in their habitat.

Compared to other water parameters they are not as sensitive to water hardness, but the water hardness should be kept between 10-13 dGH. They do not require any specialized lighting so a general freshwater aquarium lamp will be enough.

All of these parameters are easily monitored with a thermometer and basic water testing kit. Make sure to test the water regularly to keep these sharks to stay healthy.

As for substrate you should use a mixture of pebbles to create a base of around 1cm.

Although Bala Sharks do not spend time at the bottom of the tank, it is best to have a smooth substrate to minimize the risk of snagging on their large fins.

For décor they do best with live plants that do not take up too much room. The best live plants are:

These fish love to swim and they love having a lot of room to swim in. It is best to leave the center of the tank quite plain, so only keep plants and décor around the edges of the tank – Java Moss works best. 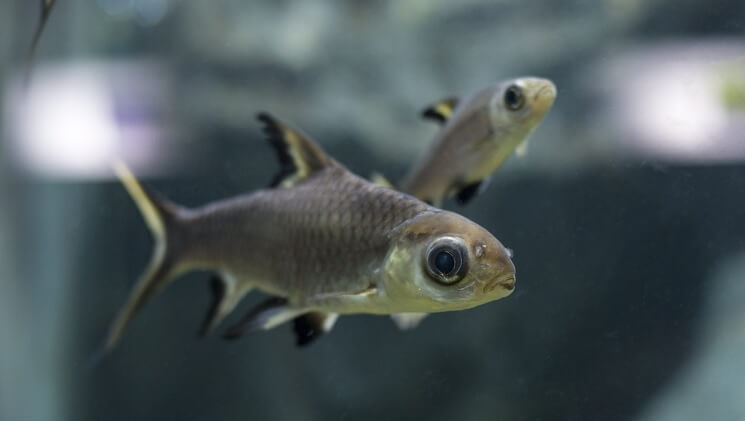 Bala Sharks are well known for being very social and peaceful tank mates. They can be kept in a community tank with many beautiful species including:

You should avoid keeping them with Neon Tetras, Harlequin Rasboras, Guppies, and other small fish. Small species are often mistaken for food. It is also best to avoid any non-fish tank mates like shrimp and snails as they will also be mistaken for food.

They are very active fish and can swim around for hours. Because of this you should avoid timid and slow-moving fish as they will get stressed by all the activity.

Finally, it is also important to remember that these large fish can still be bullied. You should avoid any known bullies like Jack Dempseys, Oscars, Red Devils and other large, aggressive Cichlids.

Bala Sharks are natural schooling fish so they must be kept in groups of at least 4.

Around 6 kept together will work best. 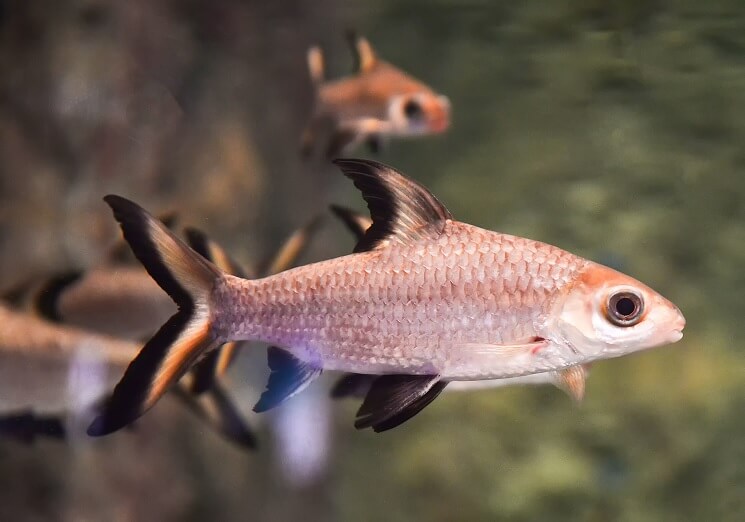 This species is not recommended for first time fish keepers because of the requirements needed to keep a large tank.

While caring for this species is simple, keeping a large aquarium is challenging for beginners.

This can make them more susceptible to common freshwater illnesses such as dropsy and Ich. However the risk of catching these illnesses can be reduced by regular partial water changes of 25% each week and regular cleaning.

This will give them key minerals and vitamins they need to stay healthy.

As long as water parameters are met and their diet is varied they will remain healthy and active.

Bala Sharks are omnivorous which means they will eat plants and meat.

In their natural habitat they have a varied diet of crustaceans, insects, larvae and algae. This needs to be reproduced in their aquarium by feeding them a variety of different foods.

High-quality flakes or pellets should be a staple food in their diet and regularly supplemented with vegetables such as spinach, lettuce, shelled peas and zucchini. You should also add live foods such as bloodworms, daphnia, and brine shrimp.

Some of their favorite live foods are mosquito larvae, earthworms, bloodworms, and blackworms. This will make sure that they are getting all the essential proteins needed for their size.

As long as this species has a wide variety of foods available, extra supplements will not be needed.

A Bala Shark will eat anything and everything they find and this makes it easy to overfeed them.

To avoid this you should stick to a regular feeding time.

The Bala Shark is a naturally schooling fish that feels more comfortable in groups.

Naturally they are very active swimmers and require a long aquarium to fulfill their swimming needs.

They are also a pelagic fish species which means they spend the majority of time in the middle levels of the water column.

You just need to make sure the aquarium is big enough because they become aggressive if overcrowded or when kept alone.

Also if you only keep 2 together it will bring out the territorial side of them (especially if they are both males). This is because naturally in the wild they will create a pecking order within the schooling group where one male will establish dominance over the other fish.

One male will assert dominance by chasing and nipping the others. Only keeping 2 together can encourage this aggression which will become bullying and will get progressively more aggressive.

Can You Breed Bala Sharks?

It is very difficult to breed them in home aquariums.

Most of the specimens that you find for sale will be bred in Asian fish farms using hormones.

If you are going to try and breed this species then you have to be prepared.

You need to start by separating a group of Bala Sharks into a breeding tank of at least 70 gallons with a temperature between 72-82°F. You need to do this when they are at 4 months old. At this age it is very difficult to tell the difference between males and females and so a group is needed to increase the likelihood of a group with mixed sexes.

This breeding tank will be needed to keep partly barren and any plants/décor should be placed at the edges of the tank.

There has been no studies into the breeding behavior of Bala Sharks however there is usually some type of dance between the male and female which is followed by the laying of eggs.

The eggs are then fertilized externally by the male.

In the wild the parents will leave the eggs in spawning grounds with no protection once they hatch.

If you are successful you should remove the parents from the tank, as it is likely that they will eat their own fry.

Your young fry will need to be fed several times a day with a varied diet including brine shrimp and commercial fry food.

Should You Keep The Bala Shark (Summary)

Overall the Bala Shark is a gentle and peaceful shoaling species.

They must be kept within a group of individuals of their own kind in order to be happy, healthy, and active.

Just remember that they have a big appetite and require a very varied diet in combination with perfect water parameters to prevent illness and disease.

Will the Bala Shark be your next addition?

The Cory Catfish is one of the most famous bottom dwellers that you can keep in a freshwater aquarium. They are famed for their small size and beginner friendliness. With over 100 different species available, each one is just a Read More →

Cichlids are very popular freshwater fish and can be found in tropical lakes and rivers in South America, Africa, and India. African Cichlids come from Africa’s 3 great lakes: Malawi, Tanganyika, and Victoria. They are incredibly colorful but are notorious Read More →

The Rummy Nose Tetra is one of the most popular Tetras around. Their bright red nose and shimmering silver body have helped make them so popular. With their peaceful temperament and attractive colors, these tiny fish are a must-have for Read More →