Fish live in water and we live on land.

However in order fo us to live we both need to inhale oxygen.

This article will answer that question and also address some common misconceptions about how fish breathe. 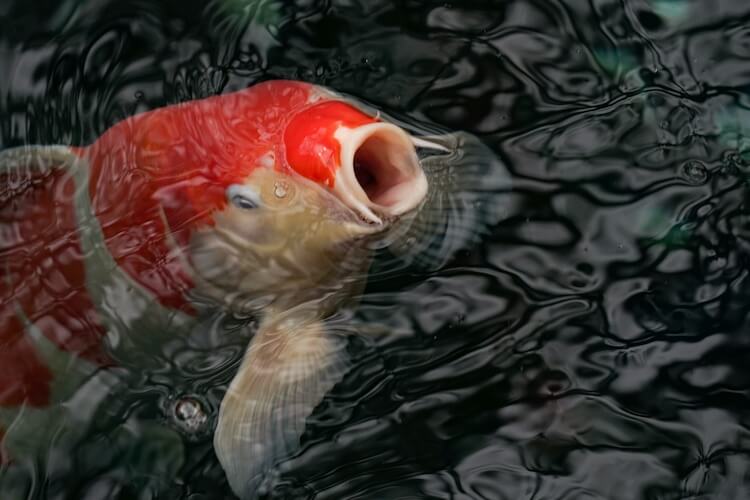 What Does It Mean To Drown?

The definition of the word drown is: “to suffocate by submersion especially water”.

However, this definition does not really help us understand if fish can drown.

To look further we find that different medical websites further define the word drowning as “suffocation resulting from aspiration/inhalation of water or other fluids”.

So both definitions of drowning imply that in order to drown, water has stopped the ability to breathe.

Where it gets more interesting is when we look for the definition of the word suffocate; “to stop the respiration of” or “to deprive of oxygen”.

According to these definitions a fish cannot drown in water because they lack the structures (lungs) that are needed to drown. However, a fish can suffocate in water if they are deprived of oxygen. Considering that suffocation and drowning are usually interchangeable in common speech it easy to see where this confusion comes from.

To understand why fish can suffocate but not drown we need to understand how fish breathe.

For clarity’s sake the terms “breathe” and “respire” will be used interchangeably.

To breathe is “to take in oxygen and give out carbon dioxide through natural processes”.

Fish have gills instead of lungs so naturally they have a different way of respiration. Here we will explain how a typical fish breathes.

In the Ocean fish rely on the dissolved oxygen that is in the water. The levels of dissolved oxygen in healthy waters is typically around 6.5-8 mg/L of water. For reference the air at sea level is 21% oxygen (roughly 210 mg/L).

No matter the water parameters it is undeniable that fish have evolved an efficient way to extract oxygen from the water.

Ventilation is defined as the movement of water in and out the fish. When fish ventilate, water first enters the mouth where it is diverted towards two pairs of gills that sit either side of the fish. The water passes through a set of gills and then flows out of the fish via the operculum.

There is another way fish breathe.

Some sharks and fish breath by keeping their mouth open and swim to maintain a steady stream of water over their lungs. This is called ram ventilation and the major drawback to this is that the fish has to swim continuously in order to breathe.

Only a few species exclusively use this style of breathing. This includes tuna, great whites, mako sharks, salmon sharks and whale sharks. 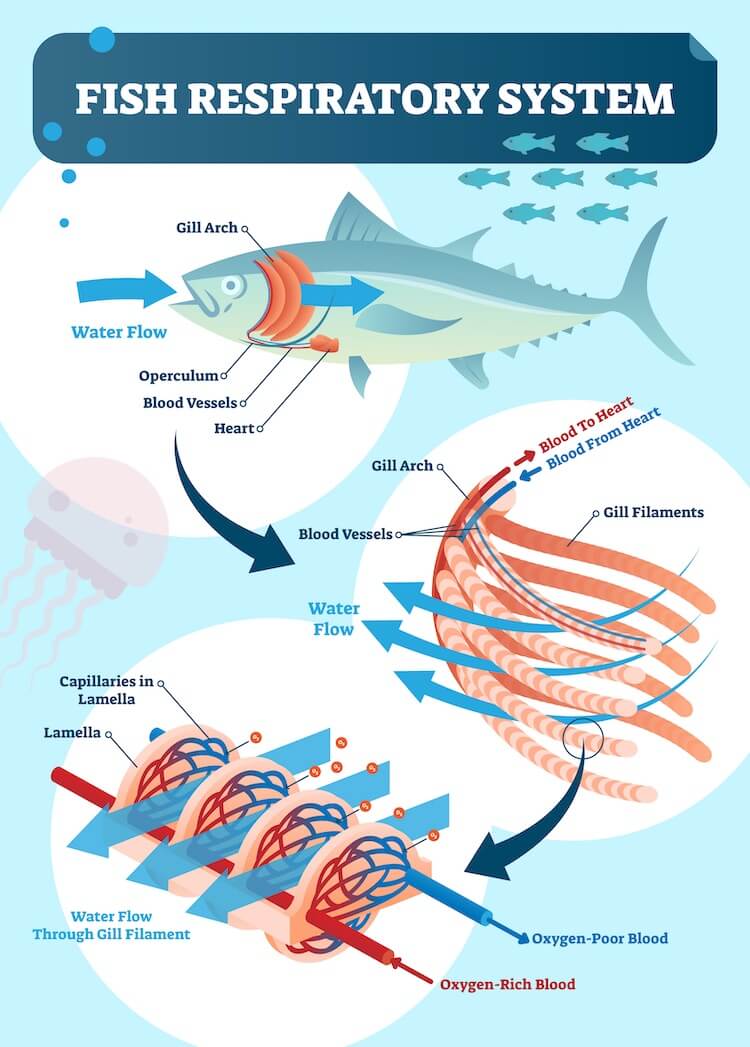 Respiration is how oxygen is actually extracted from the water. This step also includes the exhalation of carbon dioxide which is a waste product created by the fish.

To extract oxygen from the water a fish’s gills are split into multiple structures called gill filaments.

A drawback of this design is that the gills need to remain in water, otherwise these structures will stick together and dry out in the air. This is the main reason why you should never take a fish out of water for extended periods of time.

This process functions the same for carbon dioxide too, which diffuses out of the blood vessel, through the lamella and into the out current of water.

To avoid a confusing explanation of how gas exchange works, it is enough to know that dissolved gases move from a high concentration to a low concentration.

So when fish breathe the water that they inhale has a high concentration of oxygen. When the water flows over the gills, the oxygen from the water will move into the bloodstream via the gills because the blood has a lower oxygen concentration.

And if the branched gills were not enough for respiration, the gills also have another special property. The extraction of oxygen is facilitated via counter current exchange.

This means that water and the blood flow of the fish move in opposite directions. Interestingly the process actually enhances the extraction of dissolved oxygen into the fish as this process guarantees that oxygen always moves from a high concentration to a lower concentration.

So now we know how fish breathe we know that fish cannot drown because they do not have lungs.

They can however suffocate due to a lack of oxygen. When fish suffocate in water people would refer to this as drowning but technically this is suffocation.

There are two ways a fish can drown – either through obstruction of their water ways, or suffocating when the water has too little oxygen.

The first way a fish can drown is through an objecting blocking the fish’s water way.

This means a large object enters their airway and substantially blocks the flow of water. When the flow of water over their gills is slower, less oxygen gets to the fish and the fish might die if it is severe enough. If you have fish that like to interact with the substrates of your tank (e.g. goldfish), then keep an eye out for your fish. They could accidentally ingest a piece and choke to death by suffocation.

The second instance (fish suffocating due to lack of oxygen) is sadly more common in home aquariums.

There are many factors that can lead to low oxygen levels and the most common are:

If you want to avoid an oxygen shortage in your aquarium then avoid replicating the conditions mentioned above. In addition to this, make sure to regularly cycle the water and it will be very rare for a fish to suffer from low oxygen levels.

Questions About Can Fish Drown?

You may have wondered why a Betta fish can survive in a tiny tank.

Believe it or not but Betta fish (and Gouramis) can breathe air using their labyrinth organ.

The labyrinth organ is a key characteristic of fish in the suborder Anabantoidei (or labyrinth fish).

It is located on their gill arch and acts as an auxiliary organ for respiration in case the water does not have the right amount of oxygen for the fish. To use this organ the fish will come up to the surface and breath air.

In home aquariums this is usually a warning sign that the water conditions are bad.

If you spot your Betta fish or Gourami breathing air then check your tank to see if the water parameters at the right levels.

Why Don’t Fish Drown When They Sleep?

Before we answer this question it is important to clarify that fish do in fact sleep.

We are not able to easily tell if a fish is sleeping because fish lack eyelids, however fish are shown to reduce their activity and metabolism in order to rest.

So, why fish do not drown when they are sleeping?

Of course this does not stop a fish from drowning in their sleep if water conditions happen to worsen while they are at rest (e.g. landslide that increases the water turbidity which blocks their mouth and gills, or the movement of a water current that lacks oxygen).

Can Fish Drown By Being Pulled Backwards?

But what if this breathing cycle was forcefully reversed by dragging a fish backwards through water?

Assuming that the operculum and mouth stay open, this would first disrupt the process of counter current exchange that we discussed earlier. Water and the blood would move in the same direction which would reduce the effectiveness of respiration. Gills have also adapted to work in one direction, so reversing this flow might damage this delicate structures.

However, fish can freely close their operculum.

So in this situation (where a fish is being dragged in the opposite direction) they would close their gills but still try to breathe by forcing water through their mouth and out their gills in the right direction.

Yet a fish can still die if put in this situation. Imagine how stressful it would be to be dragged backwards. This would be very stressful to the fish. So although the fish will not drown, it will be become so exhausted and stressed out after that encounter it will most likely die (but not through suffocation).

So now you know that technically fish cannot drown as they lack the lungs that would allow them to drown.

However they can still suffocate when there is not enough oxygen available in the water.

Hopefully after reading this article you know now how fish breathe and how you can prevent this from happening to your fish.

Do you have any lingering questions about fish respiration?

Harry Greene
While exploring western Scotland's intertidal shoreline and rockpools when he was young, Harry T. Greene developed a keen interest in aquatic wildlife. So much so, that later on in life he went on to study for a Bsc in Marine Biology. Here he learned to hone his interests and skills and discovered his enthusiasm for shallow-water snorkelling and open-water diving. He strives to bring the knowledge he gained from his degree to practical fishkeeping and teaching others about aquatic wildlife.

Everyone knows that coral reef fish are colorful! But they are not the only type of fish to have beautiful colors. Freshwater environments all around the world are full of brightly colored fish. You can find them in shades of Read More →

There are hundreds of different blends of commercial fish foods available, but these factory-made formulas are not always the best option for your fish. Making homemade fish food is a great way to ensure that your fish’s diet matches what Read More →

A community tank is often the crowning jewel of any fishkeeper’s collection. One of the most important steps in setting up a community tank is picking compatible fish. A good community fish is one that has a calm and peaceful Read More →