Tiger Barbs have beautiful sparkling scales with uncommon color combinations and an exciting personality to boot.

You can find them in a myriad of color variations too.

Because of this they are one of the best additions you can make to any freshwater tank.

However you can have trouble with them when trying to pick suitable tank mates and with aggressive behavior during breeding times. Unfortunately they tend to be fin nippers. 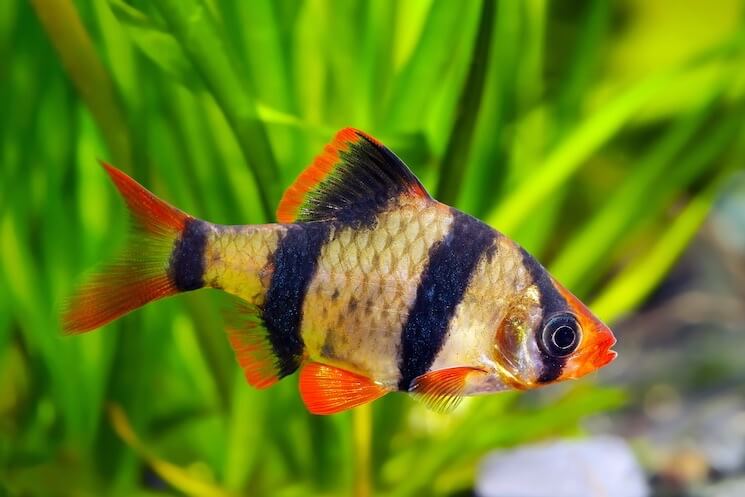 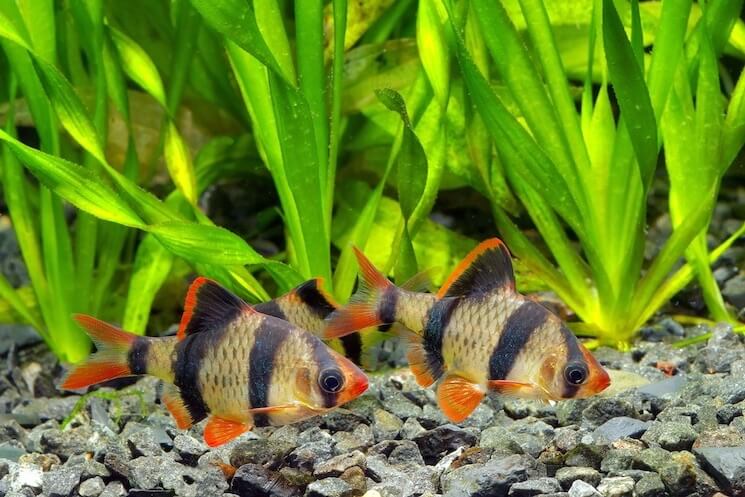 Tiger Barbs (Puntigrus tetrazona) are small and active fish that come from the swamplands of Sumatra, Borneo, Malaysia and Thailand.

They belong to the family known as Cyprinidae and are closely related to minnows and carps.

The combination of their bright colors and their bubbly personality makes them a popular freshwater fish.

If you find your tank in need of some liveliness and color, these are a home-run fish to add.

People who have just recently been introduced into the world of aquariums can easily keep them too. 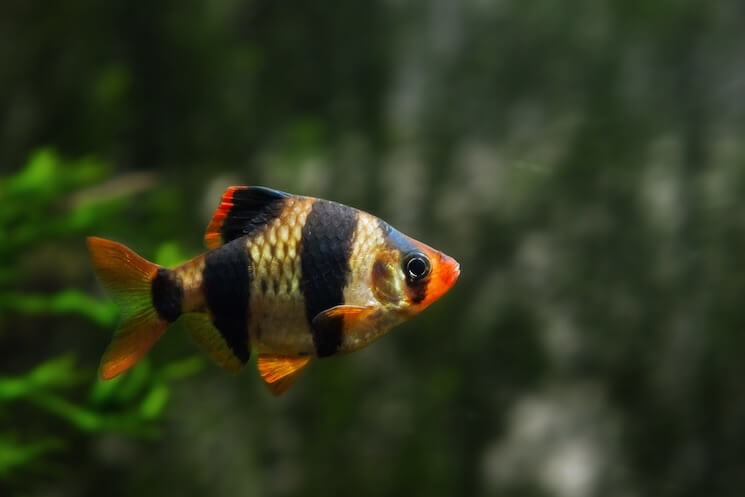 To keep your Tiger Barbs healthy you should perform routine tank hygiene.

Plants must be kept healthy too and substrate changing should be done along with the water checks.

The main illness that Tiger Barbs suffer with is ich.

Ich is a parasitic disease that affects a wide range of freshwater fish species.

It is most commonly identified by white spots on the scales of your fish. Once the parasite lands on the skin of your fish it will settle and begin to form cyst-like structures on their body.

Any animal that has this parasite should be separated from the general population immediately and quarantined. You can treat them with either medication, or by raising the water temperature.

In the wild Tiger Barbs will eat algae, larvae, worms, extraneous plant particles, zooplankton and even their own eggs.

This is an omnivorous species which means they will eat both animal matter and plants.

A good balance of food types must be fed to them to make sure they have healthy immune and digestive systems.

When kept in an aquarium the best food to feed them is:

These fish will not stop eating until you stop giving them food, so be wary of accidentally overfeeding your fish.

The best way to prevent overfeeding is to give them multiple meals throughout the day.

If you pay close attention to your fish while they are eating during a single feed then you can take note of how much food they consume within a certain amount of time. Taking size of the population and lost bits into account, you should be able to easily use this information to gain an understanding of how to responsibly break down feed sessions.

They will spend most of their time swimming around and playfully chasing each other around the mid-level of the tank.

However they do have a tendency to be aggressive with slower species that have larger fins.

This can cause a variety of health concerns and it is why Tiger Barbs should be kept separate from species like the Angelfish. Their frail fins cannot handle the constant biting and agitation that comes with the experience of living alongside Tiger Barbs.

You will need to keep a close eye on them in community tanks. 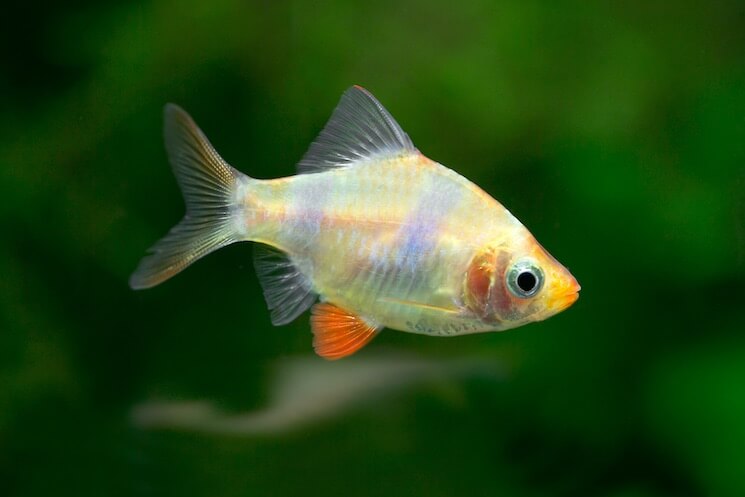 Habitat and Aquarium Set Up

In the wild this fish lives in small streams, lakes and swamps.

These habitats tend to have loose and smooth bottom layers with lots of natural debris and decaying plant life.

Tiger Barbs have a very high tolerance for changing conditions. Water temperature levels in these environments usually ranges from 73°F-78°F, but they are also prone to sudden change in both directions (extreme highs or extreme lows).

When setting up your tank you should keep the water temperature between 68°F-78°F.

Because of the resistant capabilities of this fish, there is a bit of wiggle room with these temperatures if an aquarist would be looking to add another species with more specific needs. The same goes for pH and hardness (they should be kept between 6.0 and 8.0 and 4 dH and 8 dH respectively), these values can lean closer to an extreme should another species need special accommodations.

Also keep in mind that this is an active fish so they need space for swimming.

There should be enough vegetation as well as objects to interact with and use as cover (such as driftwood, rock formations, or bogwood).

Any plants you pick should be able to reach at least the mid-level of the habitat. To simulate the same difference in light levels these fish experience in the wild you can use lily pads, water wisteria or java fern.

What Size Aquarium Do They Need?

Tiger Barbs are schooling fish so you will need to keep at least 6 of them together.

Because of this they will need at least a 25 gallon aquarium. 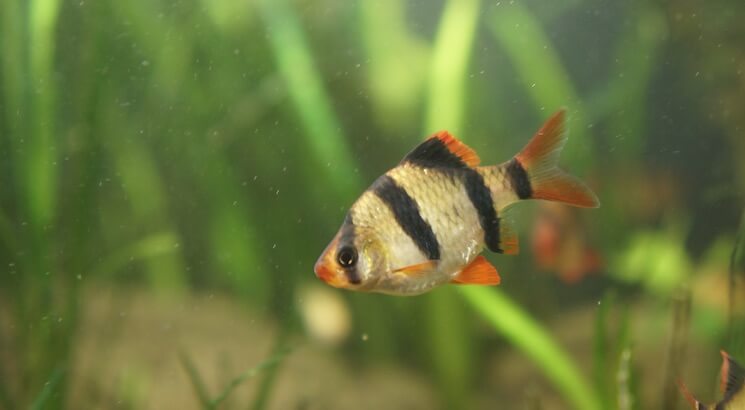 Tiger Barb are fairly small fish with most only reaching 2-3 inches long.

They are fairly chunky for their size and have solid frames.

Their spiny dorsal fin is fairly large compared to the rest of their body, but their pectoral fins are so slight that they are basically unnoticeable to the naked eye from a distance.

The most common variant is the regular Tiger Barb.

They have a yellowish body with four distinct black stripes running horizontally through their body. Although the stripes are placed differently on every individual, there is always one running through the eyes and mouth of the fish. Finally their fins are often accented with bright orange tips.

Red Tiger Barbs exist too and they have the exact same stripes however their body is a deep ruby-red color. In more extreme cases the distinctness of the red is very striking.

Green Tiger Barbs have an incredibly beautiful transition from forest green to emerald green on their bodies. Their nose, spiny dorsal fin, pelvic fin, and caudal fin all have bright orange markings on the very tips. They are also not stripped like regular Tiger Barbs.

The final type of Tiger Barb we will cover is the Albino Tiger Barb. These fish almost resemble common goldfish with their light orange-pink bodies. What separates them visually from goldfish are the silver-white stripes running through their body. There are two of them that sandwich the spiny dorsal fin of the fish. 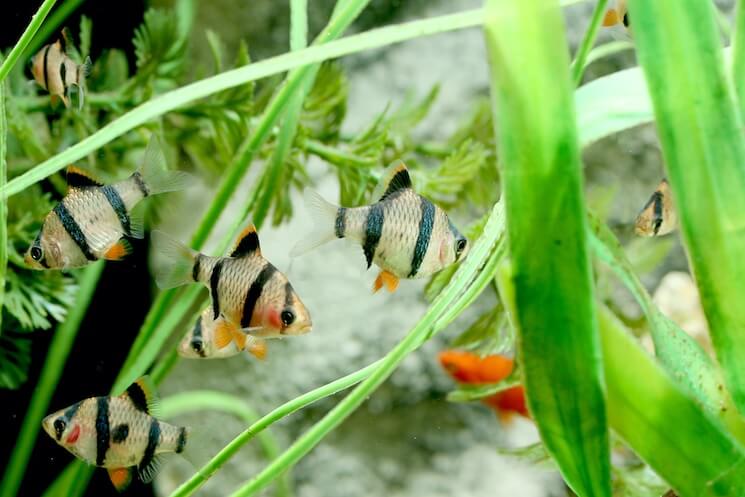 Tiger Barbs will do very well in tanks where they are surrounded by other active and fast-moving species.

They are most often seen in the wild with other species of Barbs, like the Cherry Barb.

The best species to keep them with include:

There are a few things to consider when introducing Tiger Barbs to a new tank.

Even common freshwater invertebrates should be kept separately as they are prone to harassing smaller species. Fish with long fins are the most vulnerable to these nips so they should be avoided. The one exception to non-fish species that can kept alongside Tiger Barbs are snails – there should be no issue between these two species.

This species needs to be kept together.

The recommended minimal number of individuals in a tank at a time is six.

Tiger Barb are a very social species so when kept alone they will become skittish and immobile. If these behaviors become normalized then they will lose their naturally strong immune system and will likely become sick.

This species is one of the easiest freshwater fish to breed in captivity.

At approximately 6 weeks of age Tiger Barbs become sexually developed and ready to produce young of their own.

You can pick breeding pairs that have the strongest colors and minimal flaking on their fin tips. These are both great indicators of health in an individual.

These breeding pairs can be moved into a separate tank.

The water temperature should be between 75-82°F and the pH should be around 6.

A breeding pair won’t need any encouragement from you to breed.

Instead of laying their eggs in a specific breeding location and hovering over them as a means of protection, the Tiger Barbs will simply spread their eggs across their enclosure. The eggs will sink into the substrate of the tank you are using to breed them.

The eggs will stick to the substrate and plants.

Shells will crack within 5 days and once out of their eggs, the infants will stay in their yolks for around a week.

Once they are free swimming you can feed them baby brine multiple times a day. Keep a close eye on water quality as well, as poor conditions will only lead to loss of offspring.

Not much is known about the first sighting of Tiger Barbs.

However the spread of this species to multiple countries other than its places of origin is fairly well-documented.

There were multiple unsubstantiated accounts of them in Cambodia during the mid 20th century. There are, however, established communities in Singapore, as well as several countries not in Asia including: Suriname, Columbia, Puerto Rico, and even Australia.

You can also find many recorded accounts of this species in the United States. The states in which Tiger Barbs have been seen include California, Florida, Texas and Wyoming.

Should You Keep Tiger Barbs? (Summary)

As long as the parameters are maintained Tiger Barbs will be an incredible addition to any tank set up.

They are vibrantly colored, active, and breed well.

What more you could ask for in a freshwater fish species?

As long as they are placed in a situation where they will not have an opportunity to cause other fish stress and physical pain, they will make fantastic members of a healthy community.

Do you have any stories to share of your experiences with Tiger Barbs? Let us know in the comments below…

Are you looking for a colorful fish to brighten up your aquarium? The Killifish may be what you are looking for. Killies are a diverse group of more than 1000 species and they come in a wide variety of vibrant Read More →

Peacock Cichlids are small, bottom dwelling fish that are native to east Africa. Their brilliantly diverse colors and fantastic patterns have made them extremely popular. Unlike other Cichlids they are not aggressive and they make excellent additions to a temperate Read More →

The Platy Fish is a colorful and friendly livebearer. They are often kept as a background fish in many community setups. Platies will fit into just about any community you can imagine and socialize well with other community fish like Read More →