Bristle Worms are usually considered pests and most fish keepers want to know how to get rid of them!

They are very good at hiding and make their way into your aquarium by curling up in the crevices of live rock.

Many types of Bristle Worms are actually good for your aquarium and will help clean up detritus, carrion, and other garbage lying around your reef.

However, some types are dangerous for your fish and coral.

It is important to be able to tell if you have the good kind or the bad kind.

This article has everything you need to know about Bristle Worms including how to identify dangerous ones, stings, traps, how to remove them, and much more…

What is a Bristle Worm? 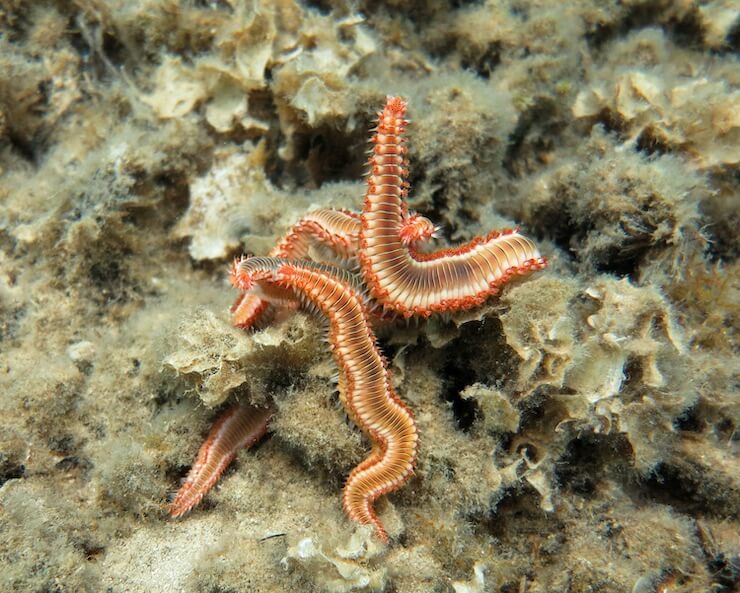 Bristle Worm is the common name used for a polychaete worm.

These worms are found in marine and brackish water habitats all over the world, and there are over 8000 different kinds of polychaetes. The smallest are around 1-4 inches long, while the largest can grow all the way up to 10 feet!

The term polychaete means many brushes or many bristles. It refers to the hairlike extensions on their tiny feet.

Bristle Worms are actually categorized by these tiny parapodia, or feet, which come in pairs along each segment of the worm’s body. The parapodia are flanked with tiny stinging hairs.

In the wild, they burrow into the substrate, just like earthworms do in terrestrial habitats. Their burrowing helps to cycle essential nutrients through the substrate. Burrowing also helps to stabilize the substrate so that corals and live rock have a firm foundation.

Some polychaetes are sedentary and spend their entire lives burrowed in the ground. Others are active and use their tiny parapodia to move along rocks and sand.

These worms are a very important food source for many marine animals.

They also help keep the reef clean by feasting on particles, carrion, and other detritus that accumulates over the reef.

In captivity, they are usually considered pests.

However, there are more helpful Bristleworms than there are harmful ones. These worms can help enrich your substrate and keep your reef free of detritus and trash.

Some species are considered destructive pests and can destroy your corals and live rock. Others may even kill and prey on your fish.

Where Do They Come From?

Polychaete worms are found in marine and brackish waters all over the world.

They can live in both temperate and tropical climates, and can even be found at the north and south poles.

In terms of brackish environments, they are found in mud flats, salt marshes, and coastlines. In the ocean they can be found in intertidal zones and coral reefs. Most species live close to the shore, but some species have been found at deep sea hydrothermal vents.

Bristle Worms most commonly end up in aquariums on live rock or coral. When these reef decorations are harvested from the sea, the wild polychaetes come with them.

Most species are small enough to hide in tiny crevices, but even the larger ones can fold up surprisingly small and slip into these spaces.

Their nocturnal activity and ability to hide makes them very difficult to notice. You might not even know that you have one until weeks or months after it has entered your aquarium.

How To Identify Bristleworms 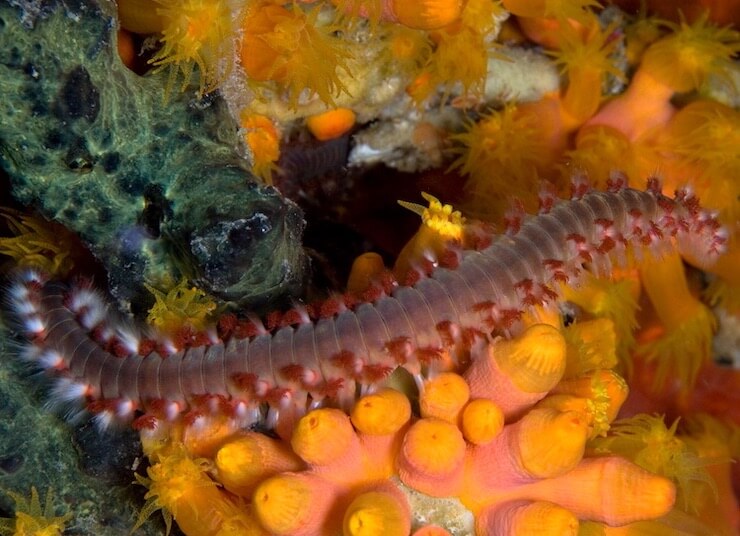 There are over 8000 different species of Bristle Worms!

Some are helpful, some are neutral, and others can cause a lot of problems for your reef and fish.

Just like the earthworm, these worms are annelids, which means their bodies are separated into segments. Each segment contains a pair of parapodia covered in tiny bristles. These bristles will sting anything that touches them.

Some species (such as the Bobbit Worm) have long antennaes or feelers which are used to search for potential prey.

The Common Bristle Worm is a small and helpful type of polychaete. They are the one that you are most likely to find in your tank.

They grow between 1 and 3 inches long and are usually red, pink, or grey. Their bristles are white, and their sting feels like a small pinprick.

These worms eat up detritus, leftover food, and other trash that can accumulate in a reef aquarium.

Other Bristle Worms can grow to over 24 inches long.

Tropical reef worms are the most attractive, as their bright colors help them blend in with coral reefs. Worms that live on mud flats or shorelines are usually brown or grey, though others may be red, orange, or pink.

The bristles will be different colors depending on the species.

Are Bristle Worms Good or Bad?

You might be wondering at this point if Bristle Worms are parasites or pets.

Common Bristle Worms and other small detritivores are very helpful to have around.

These worms are not parasites and make very effective tank cleaners. Burrowing Bristle Worms and Tube Worms help keep the substrate stable too.

Most of the time, if you see a Bristle Worm in your tank, you should leave it there and allow it to integrate into your reef ecosystem.

However, predatory Bristle Worms (such as the Bobbit Worm or Fireworm) are bad news.

A Bobbit Worm will kill any fish it finds, and certain species of Fireworms can also kill small fish. Fireworms will destroy your reef by eating the coral polyps.

Predatory worms are larger and more muscular than the detritivores, so you can identify them by their size and bulk. 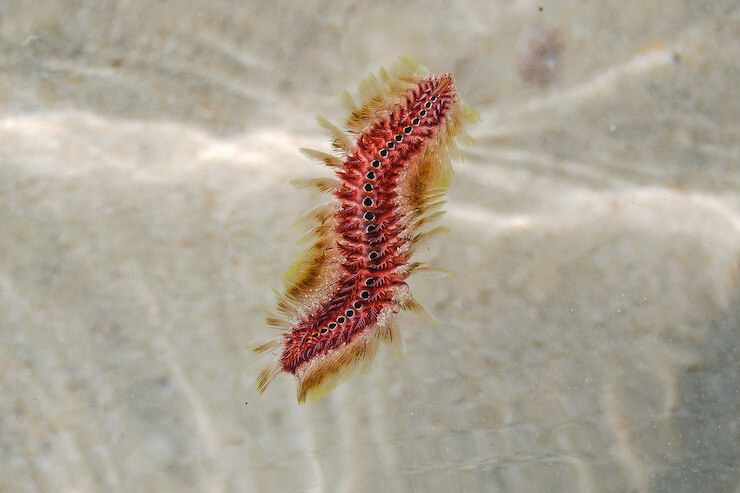 Should You Remove Them From Your Aquarium?

Some aquarists prefer to remove these worms because they are an eyesore. They are not the most attractive or interesting creatures, so many keepers do not want to keep them around.

For some hobbyists, a polychaete can be an interesting pet in and of itself. Some keepers will keep these worms in a species-only tank where they can observe their growth and behavior.

However, there are a few negatives to allowing these worms free run of your reef.

If they multiply they can quickly overcrowd the bottom of your tank and leach resources from the other tank inhabitants.

In some cases a large number of polychaetes may steal your bottom feeders’ food.

If you are experiencing any of these issues with a Bristle Worm, you should consider getting rid of it. Otherwise, it is better to save yourself the trouble of the often tedious removal process.

Some species do pose a significant danger to your reef and your fish, particularly Fireworms and Bobbit Worms. These harmful worms should be removed from the tank as soon as possible.

Getting rid of bad Bristle Worms can be tedious, but it is necessary.

How To Get Rid of Bristle Worms

There are several different ways to remove Bristle Worms from your tank.

Of course the best way to deal with them is to prevent them from entering the tank in the first place.

Before you place new live rock in your reef, you should set it aside in a separate tank for up to 2 weeks.

These worms come out at night so you should check your quarantine tank when the aquarium lights are off. If you spot a worm you can remove it before it can cause a problem. You can also dechlorinate your live rock by dipping it in freshwater before you place it in your reef. This will kill any polychaetes that may be hiding inside.

However, to remove a polychaete worm from your existing tank, you will need to catch them. This can be very difficult because they are so good at hiding!

You can either buy a Bristle Worm trap or make your own.

To make your own DIY worm trap, take a small plastic water bottle and cut the top off to create a bait chamber. Poke a few holes in the sides of the bottle for the worm to enter. Leave a piece of bait at the bottom and plug it up with straws once the worm is inside.

Once the worm is in your trap, you should use a pair of tweezers or forceps. Simply grab the worm around their body and pull it out of the tank.

Never touch one with your bare hands, as a Bristle Worm sting can pack a powerful punch!

The next option is to use natural predators to eliminate polychaete worms.

Most species of Hawkfish, Dottybacks, and Wrasses will eat Bristle Worms.

Arrow Crabs and Coral Banded Shrimp are also excellent at removing unwanted polychaete worms. Just be aware that these predators will not get rid of a Bobbit Worm.

Your final option is to treat live rock and corals with dechlorinated freshwater.

Simply dip the affected rock or coral right in and it will get rid of a Bristle Worm.

1. Some Bristle Worms Can Kill Fish.

Although most Bristle Worms only eat detritus, some species will kill fish. The Bobbit Worm is the most famous example. They will prey on anything that fits into their mandibles. Bearded Fireworms will also prey on fish by paralyzing them with a sting before eating them.

Whilst all Bristle Worms sting, some are more painful than others. Their bristles contain venom that is used to paralyze or kill the worm’s prey. The Fireworm’s sting is the most famous example, and has been compared to a bee or wasp sting. The sting of a smaller Bristle Worm feels like a pinprick.

3. The Largest Bristle Worm Is Over 10 Feet Long.

The Bobbit Worm is the world’s largest polychaete worm. It can reach lengths of over 3 feet in aquariums and grows up to 10 feet long in the wild.

In 2015 the marine biology community designated July 1st as the international Polychaete day. This day serves as a day for biologists to recognize the vital contributions these worms make to marine ecosystems.

5. Polychaete Worms Are Found All Over The World.

These worms are found at every depth in the ocean. They are considered a valuable part of the ecosystem and can even be found at deep sea hydrothermal vents, where they obtain food generated by chemosynthesis.

Just remember that a Bristle Worm can be a friend or a foe.

Most of the time, it is a helpful creature that will clean up your tank and enhance your substrate.

However, some species are pests, and some can even be dangerous for your aquarium!

Most of the time it is better to leave them alone; however, dangerous Bristle Worms must be taken out of your tank. You can use traps, chemicals, or even some of the worm’s natural predators to help. Removing one of these elusive worms can be very difficult, but it is not impossible.

We hope that this article has helped you to better understand polychaete worms.

Have you ever had to remove a Bristle Worm from your tank? Let us know in the comments section below…

The Black Moor Goldfish is not your typical Goldfish. This twin tailed Telescope variety is jet black in color. Black Moors are prized for their beautiful alluring black color and graceful swimming. However, if you want to add this black Read More →

The Clown Loach is one of the biggest and brightest Loaches you can find. Their vibrant colors and comical personality will make them a star in any aquarium. It is easy to be charmed by this intelligent Loach but keeping Read More →

The Vampire Shrimp is very different from other freshwater shrimp. This filter feeder uses their feathery fans to catch tiny particles drifting in the water column. While their name may sound scary, the critter itself is certainly not. Vampire Shrimp Read More →