Some of the best tank setups are also the smallest!

Lots of these fish are community-friendly and can live together or even cohabitate with some larger species.

Tiny fish can fill big roles that some of the larger fish cannot. They add a lively charm to the small spaces in your tank, and their eye-catching colors will draw attention to your underwater plants.

Are you considering some tiny fish for your aquarium?

Below we have listed the 17 most popular nano fish based on their size, ease of care and appearance… 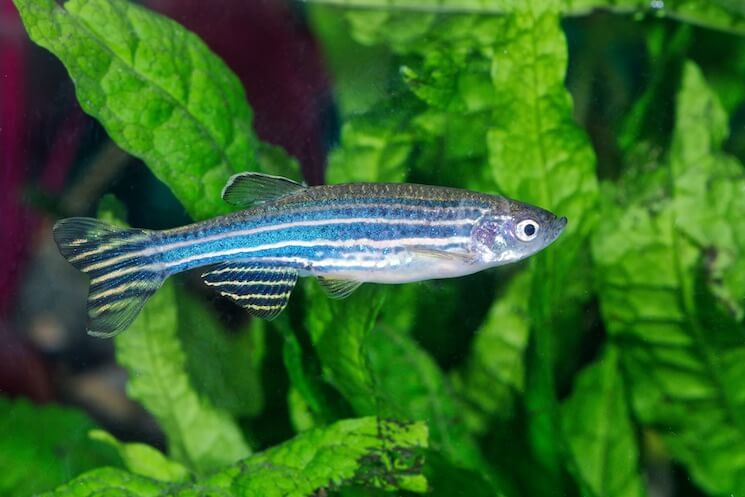 The Zebra Danio is one of the friendliest nanos around.

Their blue striped pattern can be seen from near or far, and is especially visible when the fish are in a large shoal.

It grows up to 2 inches long and needs at least a 10 gallon tank. It is extremely resilient and makes a good first pick for children and beginners.

This active fish loves to explore its environment with the other fish in its shoal and you will love watching it as it darts in and out of your plants. 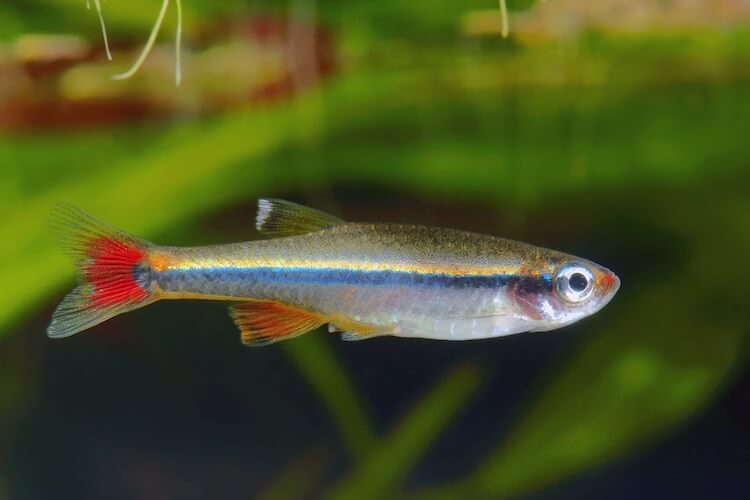 There are many beautiful fish species available for tropical aquariums, but the White Cloud Mountain Minnow is one for temperate setups.

These fish are adapted to water temperatures as low as 60°F.

White Cloud Mountain Minnows have beautiful iridescent lateral lines and bright orange fins. They grow up to 1 inch long and school in groups of 6 to 10.

You can keep them with Dojo Loaches, Zebra Danios, and other temperate-water fish. They can even live alongside some warm-water fish, such as Fancy Guppies.

To set up a White Cloud’s home, you will need a 10-gallon tank lined with light-colored pebbles. The water must be completely clear and you should use an under-gravel filter to create a mild current. 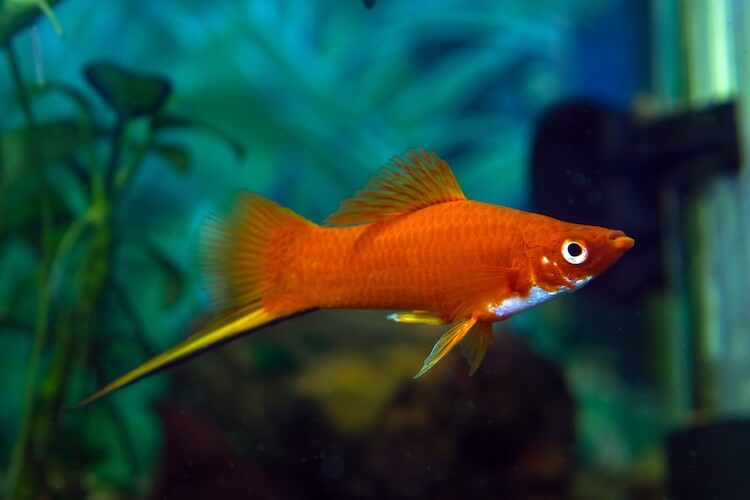 The Swordtail is a delightful livebearer that can live in freshwater or brackish water environments.

It is known as the Green Swordtail but comes in many other colors. Color varieties include blue, red, purple, yellow, gold, and many more. There are some that are even designed to resemble a Goldfish or Kohaku Koi.

Swordtails get their name from their long sword-like fin that extends from their caudal fin.

They can grow to about 5 inches long, which makes them one of the friendly fish. Even at this size, they can be kept in a 10 or 15 gallon tank. 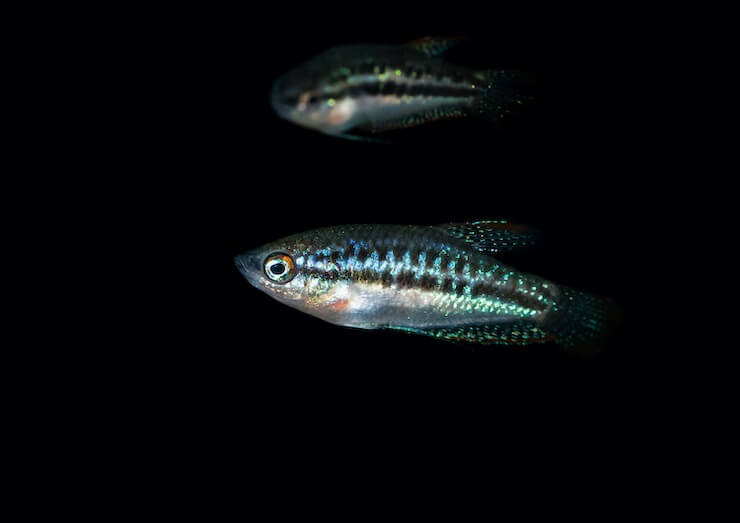 The Sparkling Gourami is the perfect nano Gourami.

This 1 inch beauty has a dazzling color that attracts attention from everyone.

Sparkling Gouramis have iridescent scales in turquoise blue shades. It is one of the most beginner friendly Gouramis too. They can tolerate a wide range of different salinities, acidity levels, and water temperatures.

This fish has a cult following among aquascapers who love to use them to add color to a planted tank. Its habitat can be decorated with Dwarf Hairgrass, Duckweed, or Water Ferns. 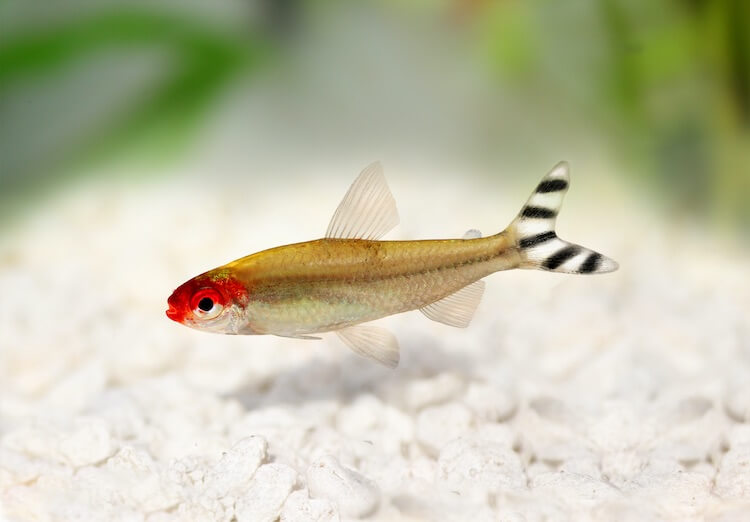 The Rummy Nose Tetra has one of the strangest color patterns of any Tetra species.

They have a splash of red over their snout which gives them the appearance of a bloody nose.

There are 3 different species: the True Rummy Nose, the False Rummy Nose, and the Common Rummy Nose. Since the species are so similar it does not really matter which one you have.

Each species grows to 2.5 inches long which is one of the largest Tetras you can get. 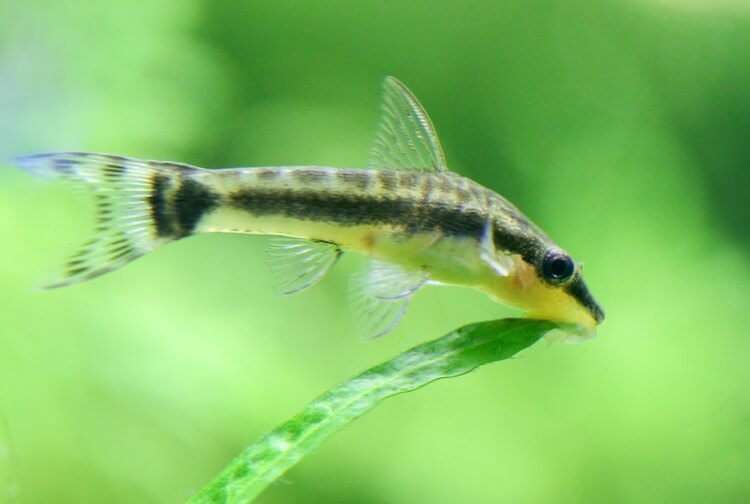 An Otocinclus or Otto Catfish is an adorable Catfish.

They are best known as algae cleaners and only grow to a maximum size of 2 inches long.

There are 19 different species of Oto Catfish, and some of the most popular include: the Common Oto, Zebra Oto, Silver Oto, and Gold Oto. The most common color form is rocky gray or brown with a single black stripe which helps them blend in with the substrate. 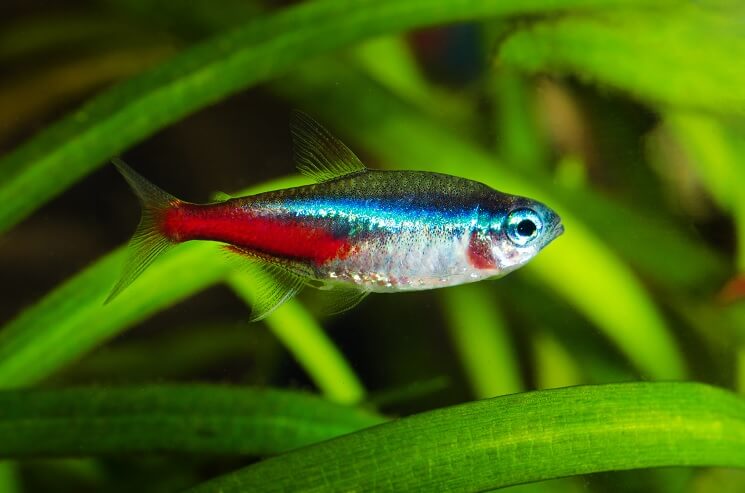 Neon Tetras are among the most famous fish.

Just like the Cardinal Tetra this fish has a red body with a shimmering blue lateral line. However, the red color only appears on the ventral side.

Neon Tetras grow up to 1.5 inches long and will shoal in groups of 15 to 20. You should allow for 1 to 2 gallons of water for every Neon in your shoal.

In a large shoal they are bold and active and will not even shy away from larger fish. 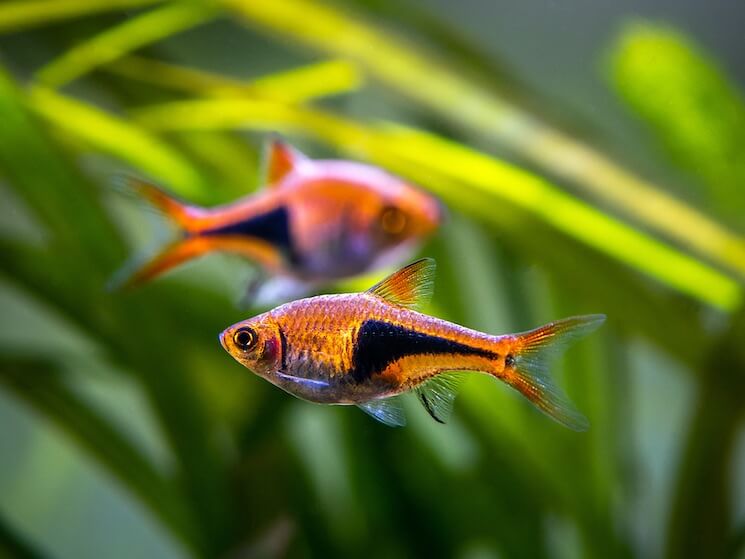 The Harlequin Rasbora is the most popular Rasbora.

They look similar to the Chili Rasbora but they grow up to 2 inches. They have peach-colored bodies, black tails, and orange fins.

Unlike Chili Rasboras it spends most of its time out in the open. For such a little fish, it is not very shy at all. Tetras, Celestial Pearl Danios, Sparkling Gouramis, and other Rasboras make excellent tank mates. 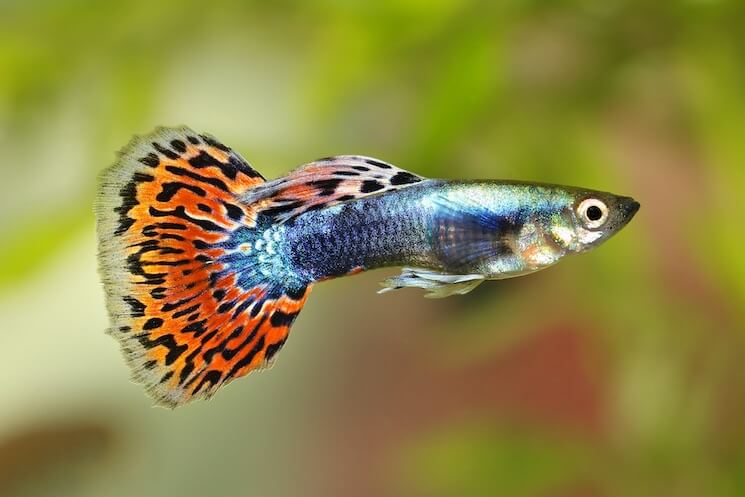 The Guppy is one of the most beautiful nano fish around.

You can find them in red, blue, yellow and orange. You may find two, three, or even four colors on the same fish.

In addition to the many available colors, there are also several patterns and designs. The Tuxedo, for example, includes a light color against a dark base. On the Lace variety the colors appear in an intricate lattice design. Snakeskin features a color pattern that resembles snake scales.

Guppies can live in a 5-gallon tank but will feel more comfortable in a 10-gallon tank where they can shoal. They can live alongside Platys, Swordtails, Rasboras, and Tetras. 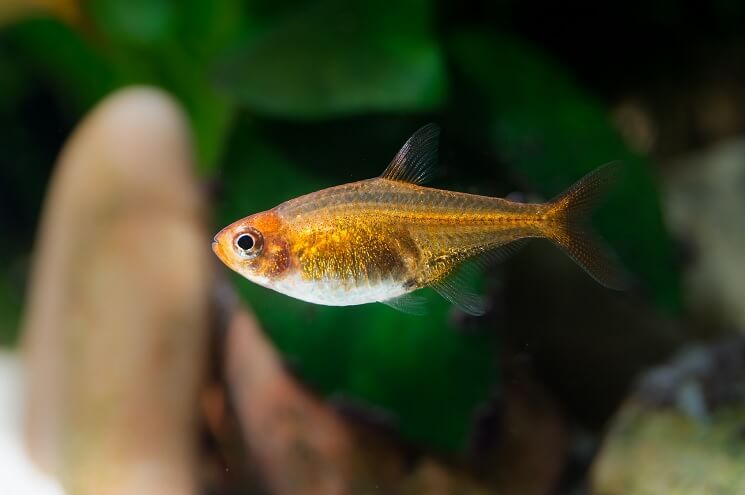 Ember Tetras are tiny fire-colored fish that travel in schools of 8 or more.

They are less than an inch in length but their bright colors make up for it!

A school of 8 Ember Tetras needs a 10-gallon tank with a temperature of 68°F or above.

However, the larger your school of Ember Tetras is the more they will stand out. You can create an even more eye-catching underwater world by adding them to a community full of Neon and Flame Tetras, Harlequin Rasboras, and other brightly colored small fish.

They are sure to attract attention in a garden full of both rooted and floating plants. 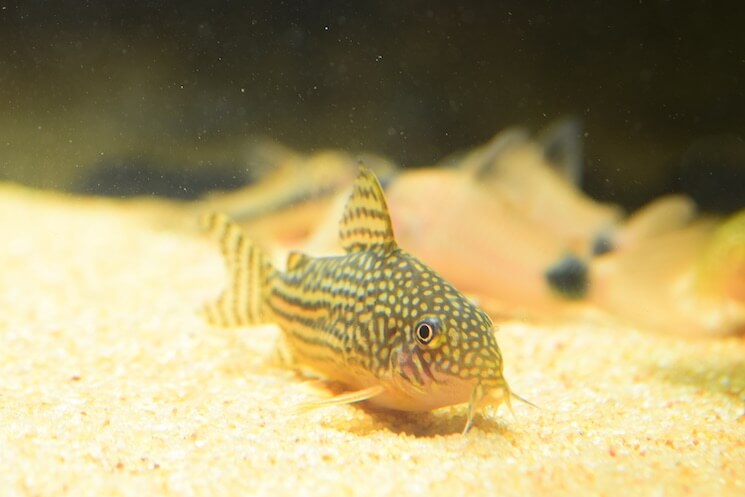 When most people think of a Catfish they think of a very large fish with long whiskers.

However, the Cory Catfish is a friendly Catfish that grows up to 4 inches long.

They are often mistakenly kept as algae cleaners but they do not actually eat algae.

Instead these fish are meant to add life and color to the bottom of the tank. They come in iridescent green, spotted patterns, albino, pink, or even gold.

Corys will get along well with Tetras, Livebearers, Loaches, and Rasboras. They may even join a shoal of Tetras. 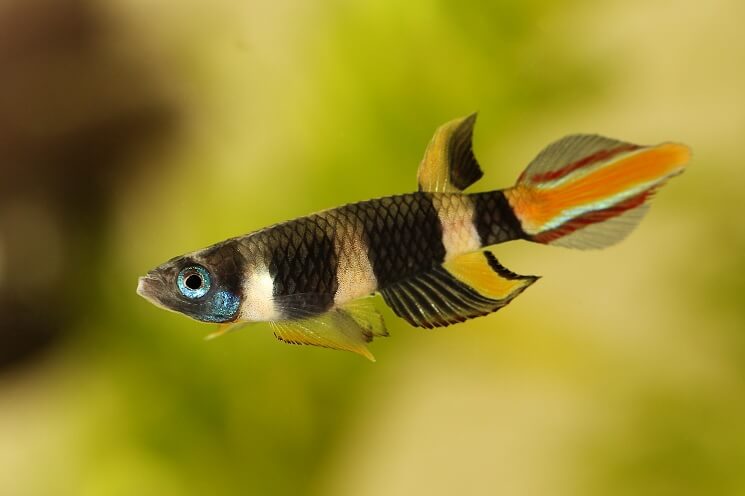 Most freshwater Killifish live in pools that dry up after the rainy season, so they only live for 1 or 2 years.

However the Clown Killifish does not have this problem.

This 1.5 inch Killifish lives in permanent bodies of water in the wild.

Clown Killifish need a 5 to 10 gallon tank with slow-moving water and a very quiet filter. They need lots of open space to swim around and school in. You can watch them chase each other around the tank, rush the surface, and even jump! 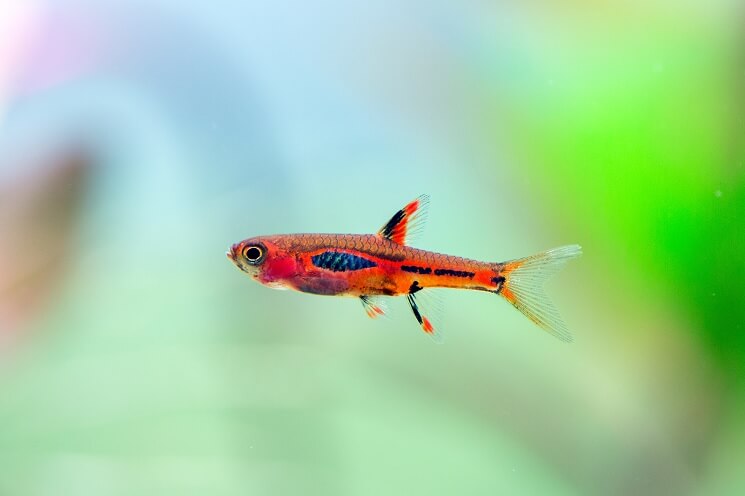 At just under an inch long they are among the smallest Rasboras.

These nano schooling fish are easily startled by sudden movements and loud noises. They can even die of shock if they are distressed.

Their tank mates should be 2 inches or smaller and have a peaceful nature. Pygmy Rasboras, Guppies, and Celestial Pearl Danios are a few safe choices. 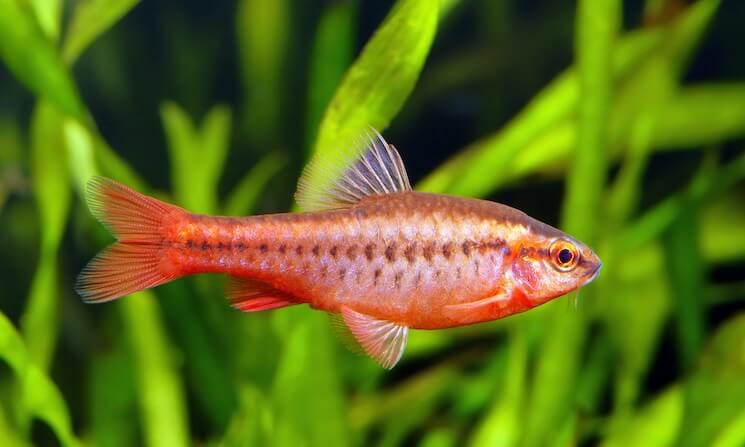 The Cherry Barb is a peaceful community fish.

It grows up to 2 inches long and can be found in many different shades from blush to cherry red.

They do not nip, so there is no risk in housing them with Gouramis and other long-finned fish. They will also fit in with Tetras, Rasboras, Loaches, and small Catfish. 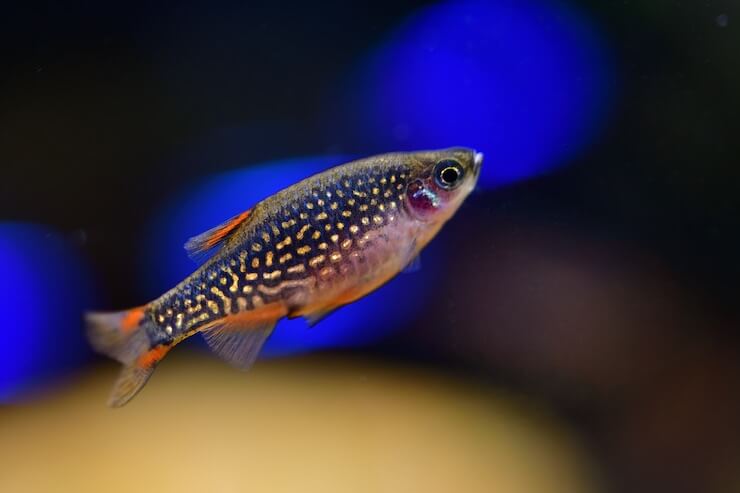 Danios come in many sizes and colors.

The Celestial Pearl Danio is not only one of the smallest, but also one of the most beautiful.

In fact when it was discovered in 2006 its striking colors were mistaken for a photo manipulation. It features a white pearl pattern over an iridescent blue body.

A light intensity of 3 watts per gallon helps make their glittering scales stand out even more. 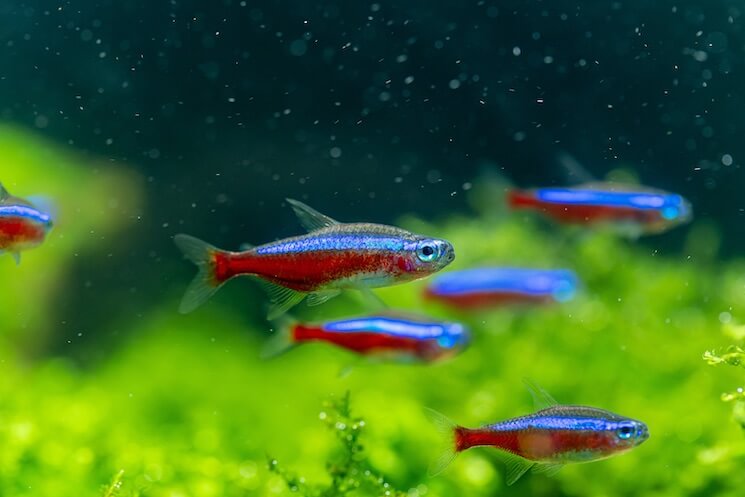 The Cardinal Tetra offers a streak of bright red for your aquarium.

This shoaling community fish makes a great addition to any aquascape.

It grows up to 2 inches long and lives in groups of 6 to 8. Its bright red body and shimmering blue lateral line will be noticed in any freshwater tank.

Cardinal Tetras are great for brightening up the background of your aquarium and drawing attention to your plants. They love swimming in and out of Java Ferns. 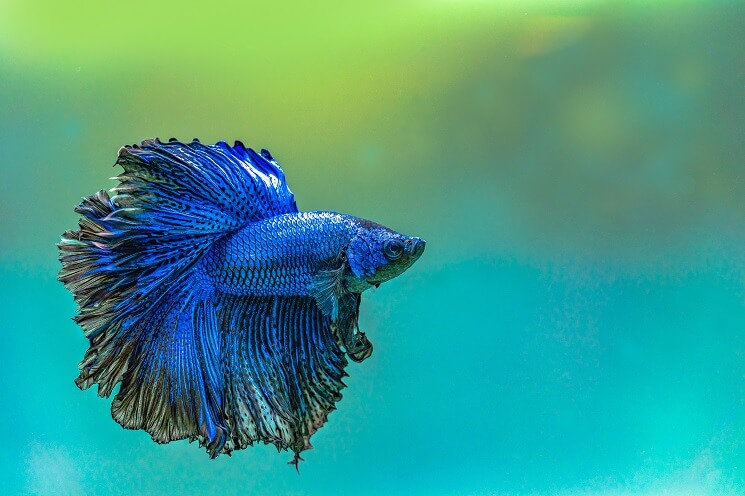 The Betta Fish may be the most famous fish of all.

This small but fierce fish is a type of Gourami that reaches about 2 inches in length.

You can find them in bright red, purple, blue, yellow, and turquoise colors.

It is called the Siamese Fighting Fish because it is extremely aggressive toward its own kind. However, they can learn to get along with small schooling fish such as Tetras and Rasboras. They should never be kept with their own kind or other Gourami fish.

Which nano fish is the easiest to breed?
The Guppy is considered the easiest nano to breed.

Most of the time it does not even need any help to breed. If you have a group of Guppies in your tank then do not be surprised to find several new additions over time.

How long do Nano fish live for?
Unfortunately, most nanos have short lifespans.

The average lifespan of any nano fish is about 5 years.

What are the smallest Nano fish?
The Ruby Rasbora (Paedocypris progenetica) is the smallest nano fish and one of the world’s smallest vertebrate animals. This fish is less than half an inch long and it can school in a 3 to 5 gallon tank.

You will just need to make sure each of your fish has enough space. When stocking your tank you will need to consider the size of each fish and their shoals, activity level, swimming distance, and personality.

Which Is The Best Nano Fish For You?

Keeping large fish can be fun, but you should not overlook all of the wonderful nano fish out there.

These fish are so tiny that you can fit a group of them into a 10-gallon tabletop tank. Their small size is compensated for by their colorful appearance and resiliency.

Which nano fish have you raised in your tanks? Let us know in the comments section below…

In total there are over 30,000 freshwater fish species. Some of the most diverse fish, invertebrates and aquatic plants inhabit freshwater habitats. Are you looking for some good stocking ideas for your freshwater aquarium? Here is a list of the Read More →

Danios are among the friendliest of aquarium fish. There are many that you can choose from but the Celestial Pearl Danio certainly stands out as one of the best. This tiny fish is well known because of their iridescent blue Read More →

40 Gallon Fish Tank: Everything You Need To Know

A 40 Gallon Fish Tank is a great choice for a beginner. You can keep a wide variety of fish in this tank. It is the perfect size for your first community tank and is also brilliant for keeping singular Read More →